Butaro Hospital Overview
In January 2011, the Rwandan Ministry of Health and Partners In Health (PIH) opened the 140-bed Butaro Hospital in the Burera District of Rwanda. Burera District, which has a population of over 340,000, has historically had very poor health indicators compared to other areas of Rwanda and is one of the most impoverished districts in the country. Prior to PIH’s arrival in 2007, Burera was one of the last two districts in the country without a functioning district hospital and the population lacked access to a single doctor. MASS Design Group was brought in by PIH in 2008 to help plan and design a first-rate facility that would help reverse these conditions.
In the design of the hospital, MASS Design Group and PIH sought to create a more holistic model of architecture that included the design of an appropriate, state of the art hospital while also fully choreographing the process of construction to employ, educate and empower the local community. 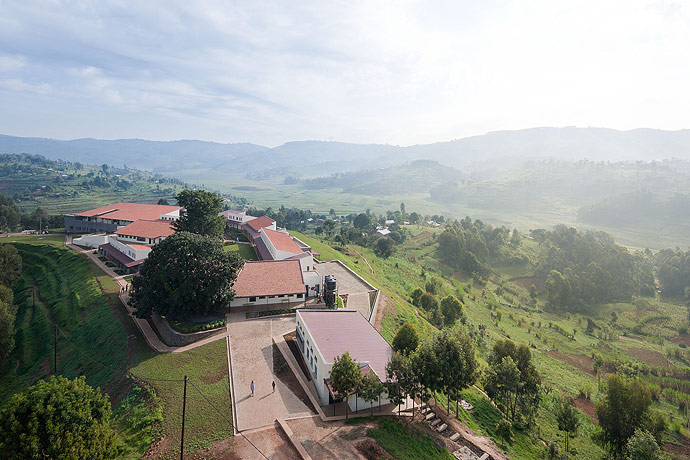 Infection Control
After immersion in the field through living and working at the Butaro Health Centre, and consultation with global health experts from PIH, Harvard School of Public Health, Harvard Medical School, and the Centre for Disease Control, the issue of nosocomial or hospital- borne infection became apparent. Due to crowded corridors and insufficient ventilation, patients and healthcare providers were often subjected to the high risk of contracting airborne diseases inside health facilities, particularly in rural, impoverished settings. The design of Butaro sought to mitigate and reduce the transmission of airborne disease through several systems, including overall layout, patient and staff flow, and natural ventilation, providing a template and approach that could be replicated in areas of high risk for TB transmission and other airborne diseases in resource-limited settings. 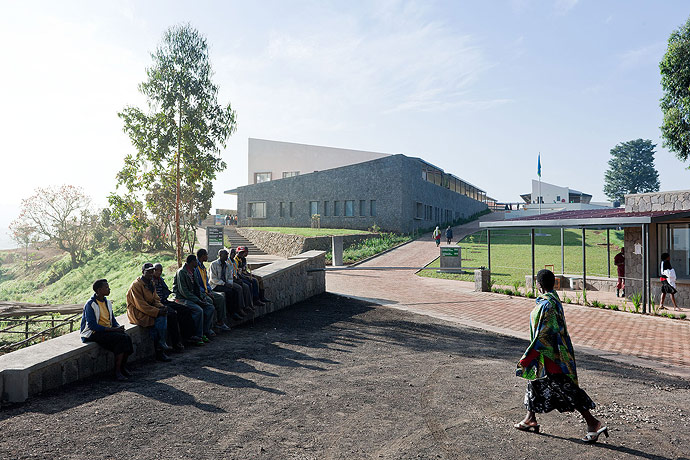 The Butaro Hospital design incorporates a range of innovative features designed to minimize risk of infection. Elimination of interior corridors and installation of large-radius fans and louvred windows ensure frequent air exchange, a key strategy in reducing transmission. In order to produce the necessary air changes in the ward, high-volume, low-speed fans with diameters of 24 feet were used at strategic points to move air from the wards out the louvres and open windows, and in doing so remove potentially harmful microbes. Germicidal UV lights were installed to kill or inactivate microbes as air is drawn through the upper regions of the room. Finally, the use of a non-permeable, continuous floor finish provided a surface devoid of joints prone to bacterial growth. The floor type is easy to clean, durable, and safe by resisting infection. 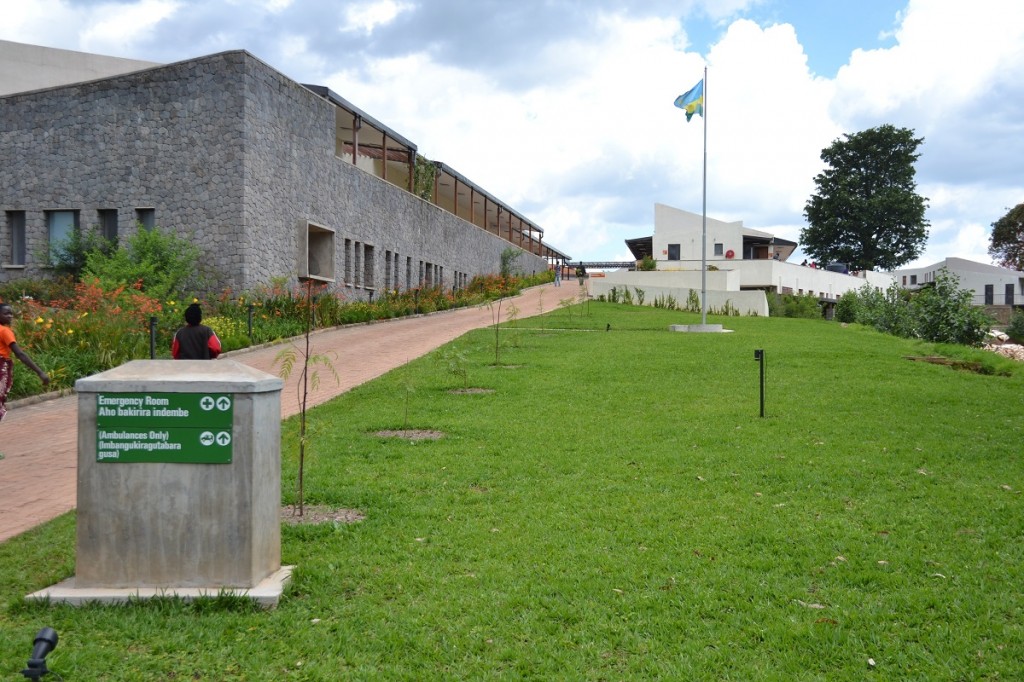 Capacity Building
Beyond providing access to first-rate healthcare facilities, the Butaro Hospital project was used as a way to spur grass-roots business and development. Constructed with local labour, 4,000 people were trained and hired to help excavate, construct, and manage the project. Employing the local community was cheaper than using solely heavy equipment to excavate the hillsides — but more importantly, it provided the added benefits of both creating jobs and engendering community investment in the project. 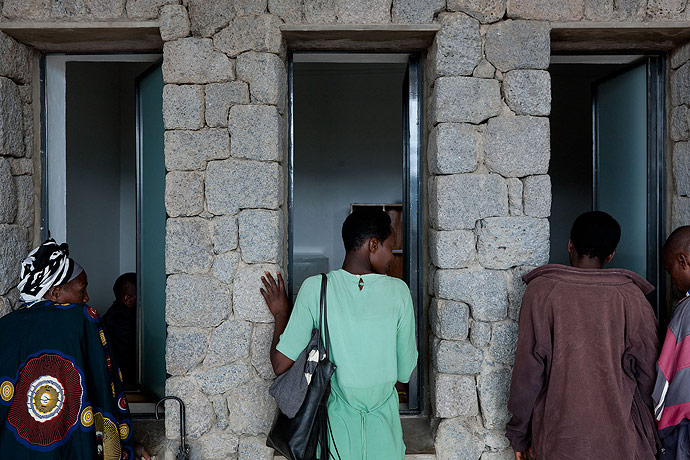 Capacity building and two-way learning occurred naturally at all stages and areas of the project, from design workshops with the local builders through on-site development of specific construction methods. Volcanic stone is a ubiquities element of the northern Rwandan landscape; commonly thought of as a nuisance by farmers clearing their fields. When used in building, it is typically only for foundations or courtyard walls, and is often covered partially or completely with mortar. In an effort to reveal the exceptionally unique and beautiful texture of the stone, MASS sought to minimize mortar, and create an even and nearly seamless expanse of deep grey porous walls. 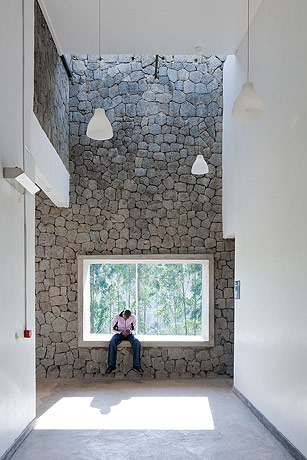 After multiple mock-ups, the masons grew excited about the product that was appearing, and as they progressed through the various buildings on the hospital campus, their work became more and more refined.
Recognizing how their skill had advanced as they worked, the masons eventually offered to replace their initial work out of a sense of pride. As newly trained, highly skilled contractors, these masons are now sought after in other parts of the country by contractors seeking to replicate the “magnificent stone walls of Butaro.” 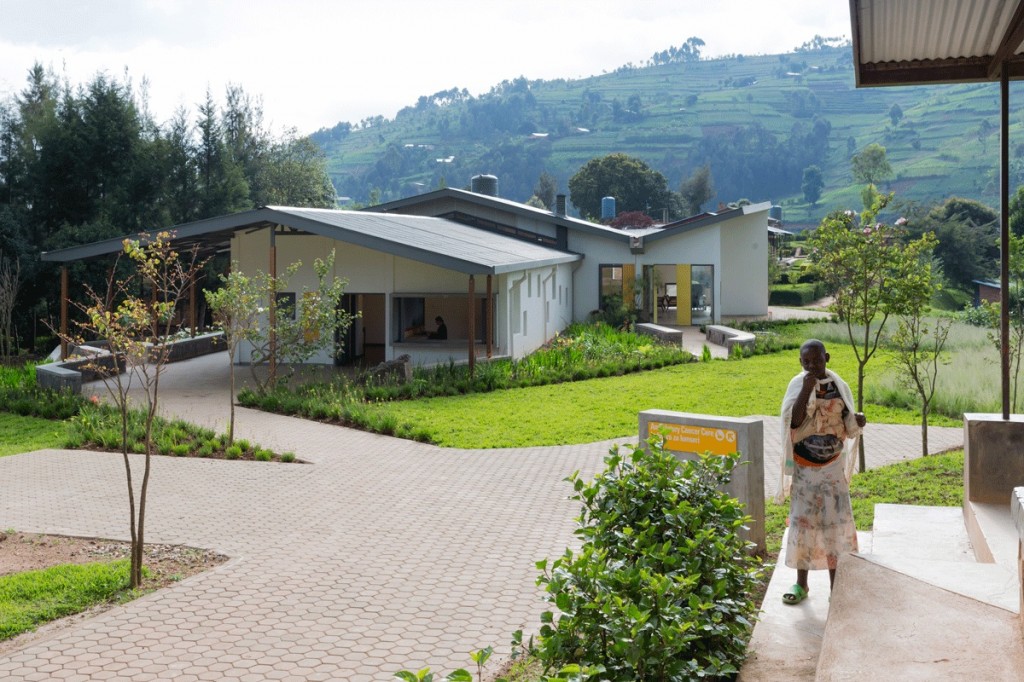