A guardian angel, exactly 1,94 metres high, lives under the Jacaranda trees in our garden in Johannesburg. This is not one of those golden European baroque angels, the kind that lives in cathedrals, and which consists only of a head and wings and a chubby butt. This one does not sing sweetly. This is an angle-grinder angel. Made in Jurie van der Westhuizen’s security steel work business in Industria, west of Johannesburg.

This is an African Matriarch, with all the feminine curves in all the right places. And an all-seeing eye. We had been discussing making her matt black, or bright pink epoxy-coated. Then Pancho Guedes said, with a glint in his eye: ‘She looks very African to me. Her skin will be a deep, dark brown.’ And so she became African that morning in Jurie’s workshop. It all felt very far from Zurich and the world of Paul Klee. 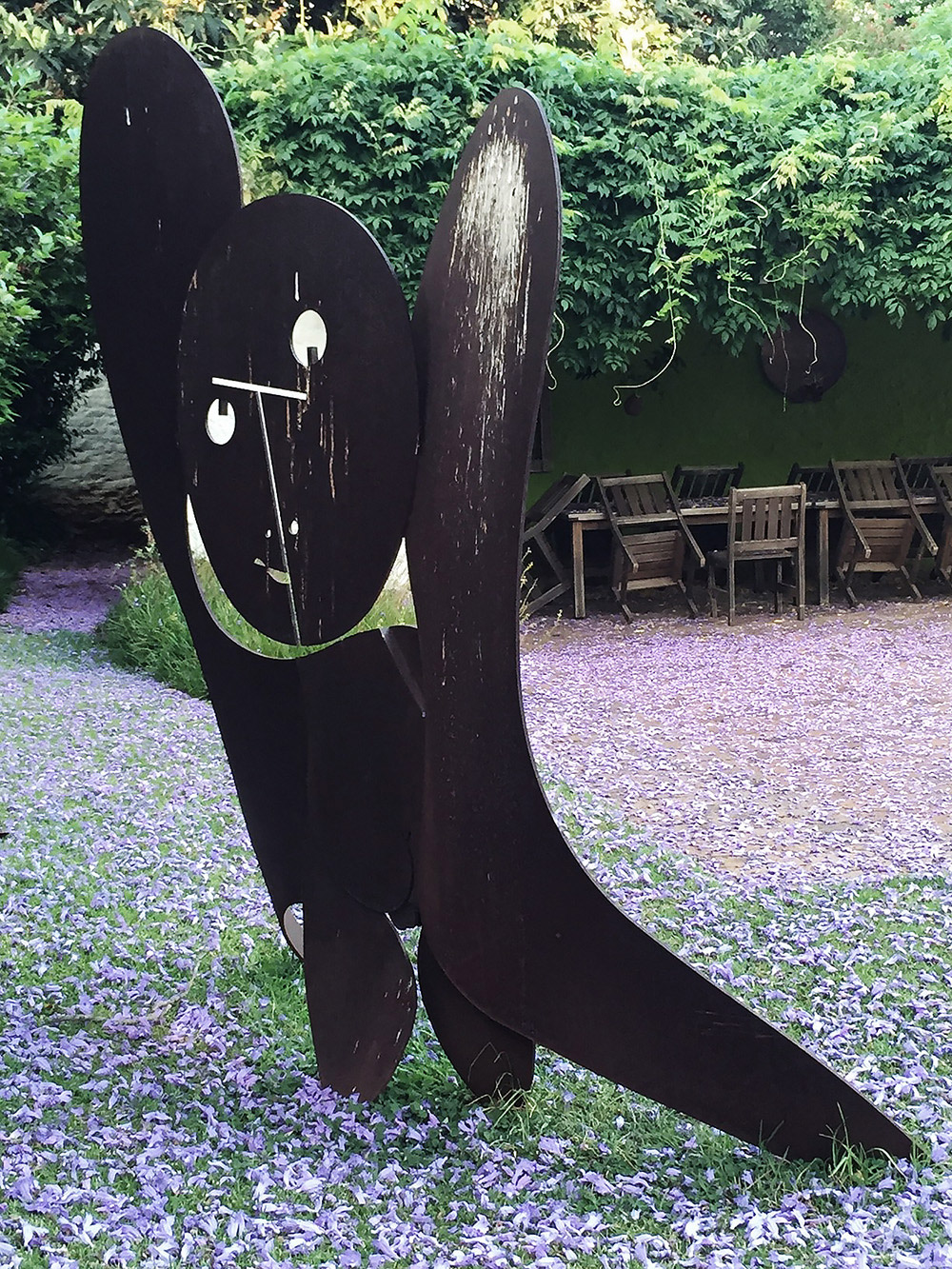 Pancho Guedes: at 90 years old, he left us poorer but richer on 7 November of this year. To the last : Still searching. Still exacting. Still with that mischievous glint in his eye. He has never taken himself seriously, but he has always taken creativity as total expression seriously. What do I remember of Pancho? Always the anecdote, the story behind the architecture, the story of people and their relationships. And so, this Still Feminine Matriarchal Guardian Angel is a story.

Why a Guardian Angel? Well, I live in Johannesburg. So I need one. Long ago, my mother said to me: ‘You should never drive faster than your Guardian Angel can fly’. So I always thought: if I am 1,78 metres tall, my angel should be shorter than me. So that he can fly faster. And that is what I told Pancho. 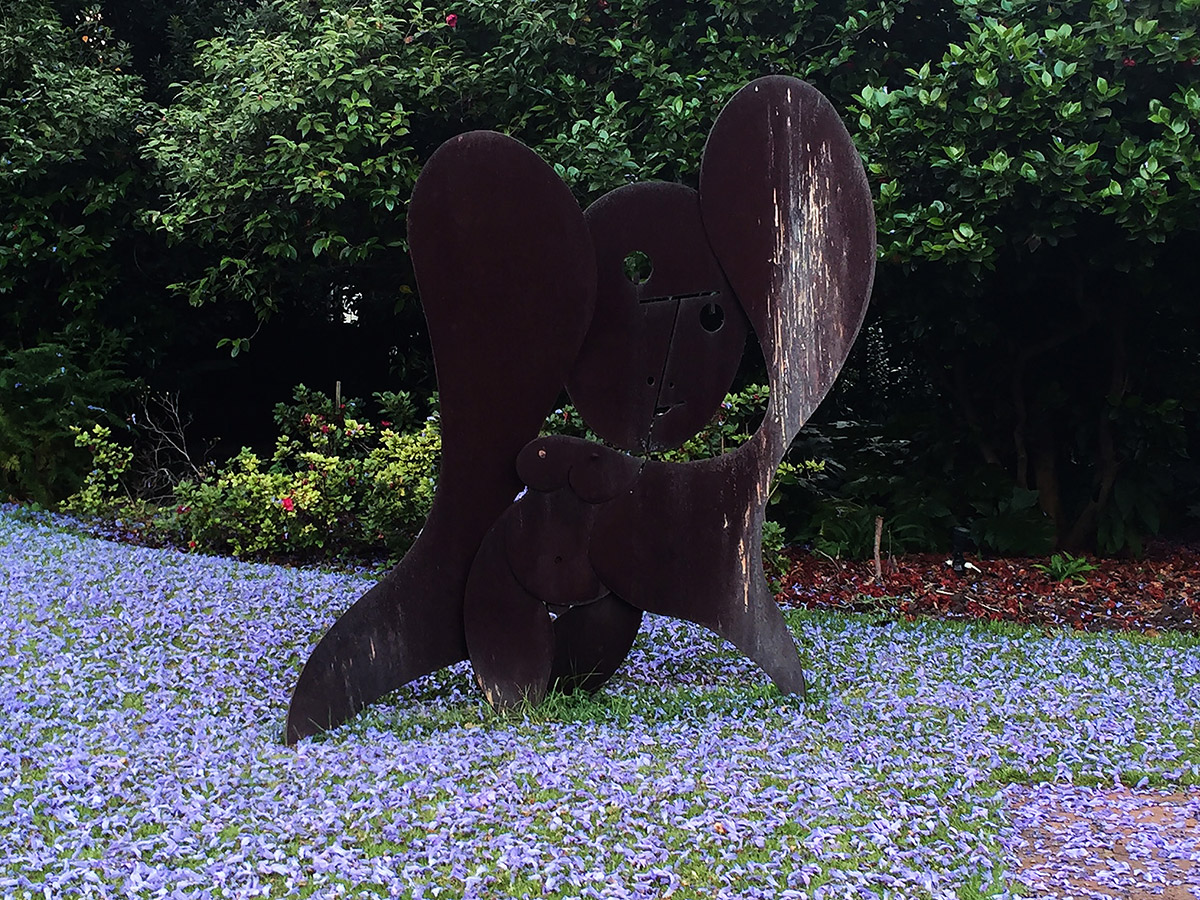 1,46 metres it would be. That is how it was drawn and priced.

She landed on our lawn about two years ago, and about four years after we first discussed the possibility of helping her to be born. At that stage, we were raising money for Pancho’s exhibition at the Iziko National Gallery in Cape Town, and I suggested that we construct a prototype and try to sell a numbered series to friends and collectors. A real Jo’burg angel : born with a business plan. This was already a year after she was conceived in Zurich by Pancho Guedes. And that follows years of study and fascination with Paul Klee’s angels. Years of drawings, and layered sketches, and an obsessive wish to make an angel. 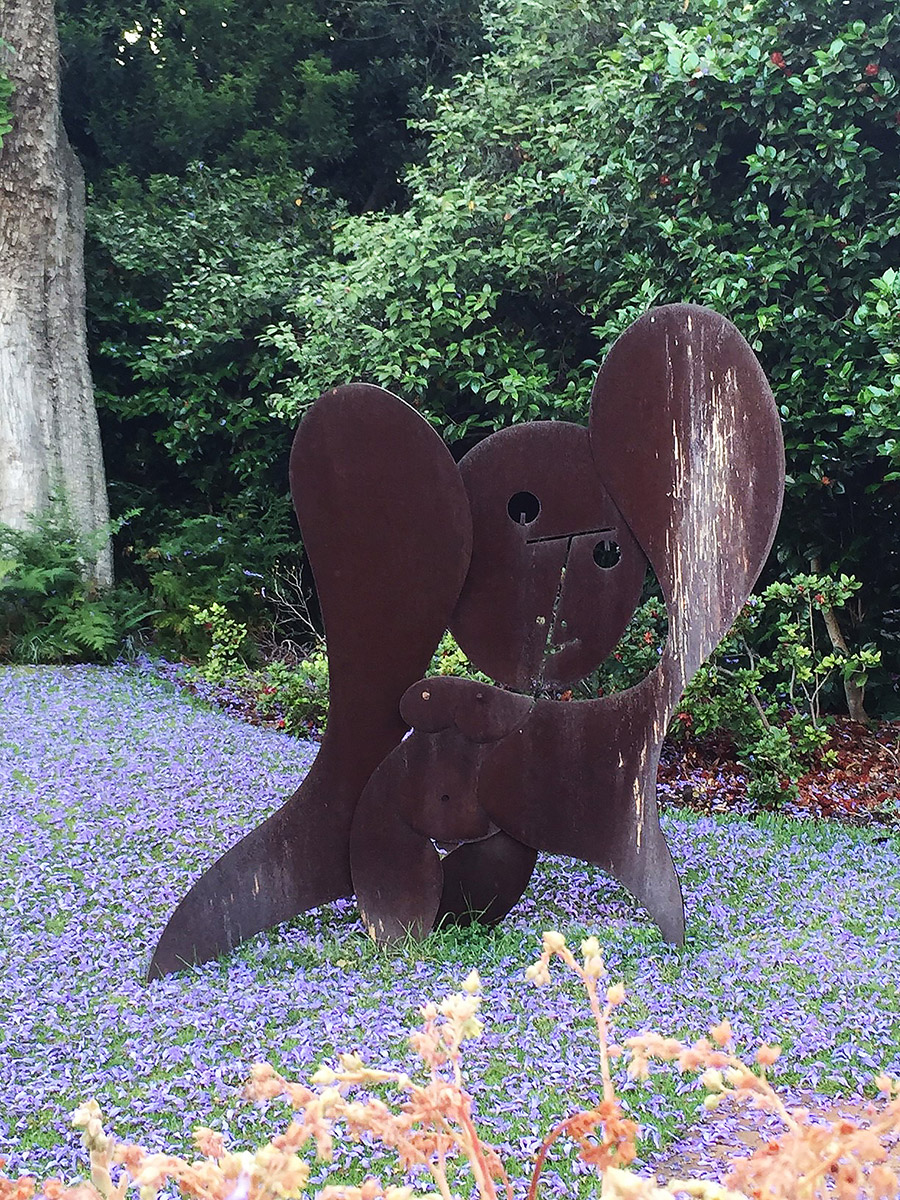 Then Pancho came to our house, on a Sunday, for coffee and strawberries and to see the building site, or landing strip, for the Angel. Everything was organised for production the following week. As he left our house, Pancho turned to me and said: ‘But Henning, she is too small. She has to be at least at least 1,94 metres tall.’ No questions, no argument.

So the drawings were changed, the price changed by instruction of the Architect, and she was digitized, cut, rolled. All while we were not watching. As happens with angels.  The hard rains of the season, under the jacaranda trees, have begun to streak her mill plate-steel skin. She even has tattoos, like a bad angel would: Her identifying tattoos, etched into the mild steel plate at 0,2mm of depth, and spelling out her name ‘SF’ for ‘Still Feminine’, will fade within the year.

She is, however, unapologetically feminine. All the right curves and buttons in all the right places. Our then 5-year-old son Alex was embarrassed, and told us that she is too naked for our garden. He suggested we should hide her behind the tool shed. But here she is: her head floats above her delicious shoulders. Her wings are ready for take-off. Her smile is sweeter than that of the Gioconda. And I could swear she has the same mischievous smile that Pancho has always had. And I drive a bit faster now, with a Guardian Angel bigger than I am.

Henning Rasmuss, November 2015
Henning Rasmuss is a director of Paragon Architects and He has actively promoted South African architecture and cities, curating several exhibitions, including a Johannesburg exhibition at the Venice Biennale in 2000 and at the Sao Paulo International Biennale of Architecture and Design in 2003 and 2005 as a member of sharpCITY. He was also co-curator in sharpCITY of the 2004 Fast Forward Johannesburg exhibition at Aedes East Gallery in Berlin and co-editor of the World Architecture Monograph on South African Architecture, published in China in 2005.