Winning entry for “AACCSA” Addis Ababa Chamber of Commerce and Sectorial Associations, in cooperation with ABBA architects and Adey Tadesse

The creation of urban potential – through architecture, and the quest for a“glocal” architecture.

Urbanism, in common perception, comes before architecture: urbanism creates potential by generating conditions to orchestrate the city’s latter architectural objects. Urbanism is a very generous way of thinking, since a lot is left open, whereas architecture is a more selfish discipline, which uses up the potential generated by others. In some rapidly changing cities of the global south though, urbanism doesn’t necessarily happen before architecture: it coincides in time. At this moment in Addis Ababa, a chaotic arrangement of individual building blocks burdens the city's collective and common spaces, due to an absent or ineffective planning culture. This, with other urban parameters, leads to tangible effects such as unsafe or absent pedestrian walkways, a lack of accessible parks and squares, and petty theft and violence in undefined public spaces.

A second relevant fact in shaping the city through buildings of considerable scale consists of the desire of local architects to import an international style of global-modernist buildings, neglecting local traditions, materials and identity in Ethiopian architecture. This imported style tries to connect with a financial reality, which is more and more global, but – with its glass façades and air conditioning – is also often climatologically inappropriate for the harsh afternoon western sun in Addis Ababa. 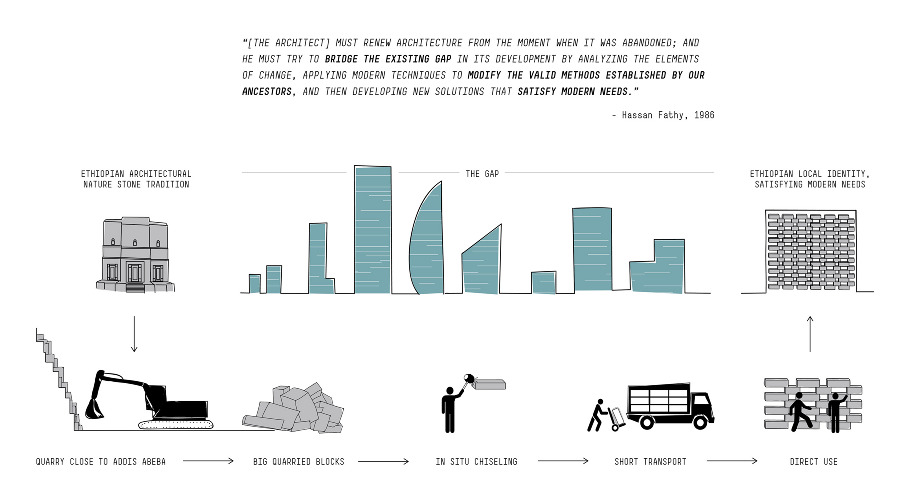 With the architectural design competition for the Headquarters building of the Chamber of Commerce and Sectorial Associations, BC architects took these facts as a starting point. Being inspired by and in cooperation with a new generation of Ethiopian architects, they considered it a joint duty to respect both the local identity and the emerging metropolis: their design aims to create potential – as urbanists do - through architecture, while trying to establish “glocal” architecture. They aim to create potential outside and inside the building, acting both as an urbanist and an architect, through the relationship of the building to the urban surrounding, and through the internal organization of the functions. At the same time, they aim to generate an architectural language serving the needs of an international entrepreneurial community, while being in line with local materials and identity. Besides using local materials, the design also refers to the ‘Netela’, a woven Ethiopian textile, which so nicely shows the threads of cotton and has a character of both shadow and transparency.

The Podium and the tower

More often than not podiums have failed to fulfill their original function as a space for pedestrians. Rather the modernist podium has installed a hierarchical distance between tower and street, creating a feeling of inaccessibility for street dwellers.

In the context of Addis Ababa, the architects try to rethink this podium critically to serve the specific social spaces of Ethiopian streets and commerce. In their design proposal, they bring the podium down to the public space where informal meetings, networking and vibrancy take place. Indeed, the term podium extends its meaning to urban scene, where the incoming and outgoing business actors are staged. And its stage is accessible.

The public street as potential, creating busy-ness outside and inside the building.

BC Architects saw in the street of Addis Ababa a potential of creating public interactive spaces both on the outside and the inside of the proposed building.

Firstly, on the outside, the building site is defined by 3 streets, and the building gives back valuable public space that facilitates trade, social encounter and exchange, in the form of 3 urban typologies: the urban park, the urban square and the urban stairs. Secondly, on the inside, the building is defined by the grand ramp, which flows from the urban square into the building and circulates around the prominent space. The good characteristics of the street – informal meetings, trade and commerce, networking, vibrancy – become a main feature of the inner circulation activities of the Headquarter Building of the Chamber of Commerce. In this way the building tries to instigate a vibrant busy-ness and networking environment so necessary for the entrepreneurial world.

The appearance of the building within the surrounding global-modernist style also was a concern to the Architects. Careful choice of materials and the façade treatment is considered to achieve a design that fits in the context but also globally acceptable. The Trachyte stone proposed for façade cladding on the podium and for structural façade on the tower is a locally quarried stone, and refers to the massiveness of Ethiopian stone architecture. The façade of the tower also refers to the ‘Netela’ (woven Ethiopian textile) which so nicely shows the threads of cotton and has a character of both shadow and transparency. 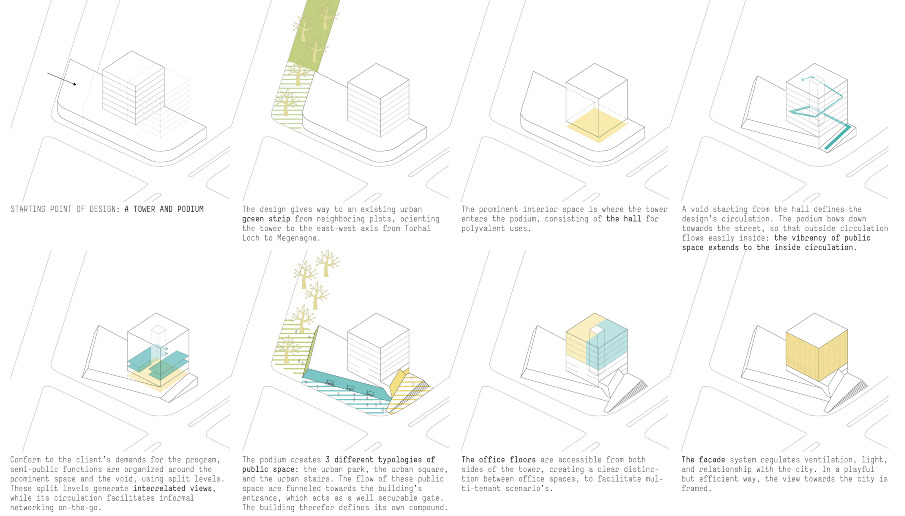 By linking this local material and façade to an architectural expressive form that could connect to a global entrepreneurial community, the Headquarters Building of the Chamber of Commerce is positioning itself as true “glocal” architecture, a result of cooperation between a new generation of Ethiopian and European architects.