The world is moving towards green buildings for sustenance of generations to come where attempts are geared towards global movement and our collective mission to create sustainable built environments and architecture that touches the earth lightly. Sustainability has been a key driver of the 21st century architecture and with that we look ten of the architects and creative built environments across Africa that have managed to meet the Green Building tag. 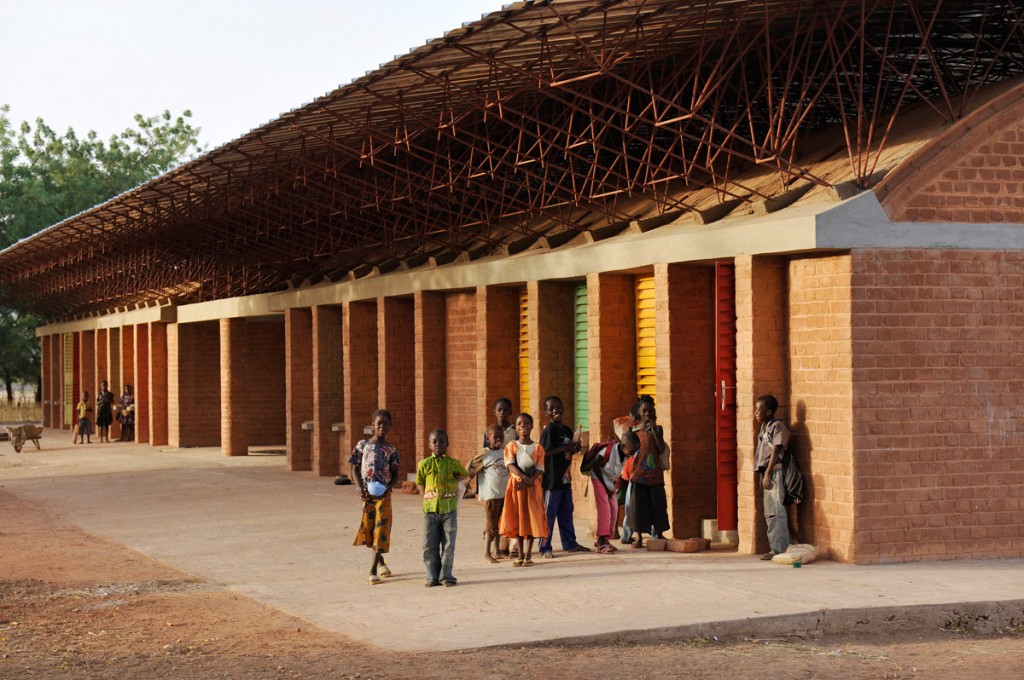 Gando Primary School, Burkina Faso |  Francis Diebedo Kere
This project was designed in 1999. It was the first building of the architect and it was completed while the architect was still studying. To achieve sustainability, the project was based on the principles of designing for climatic comfort with low-cost construction, making the most of local materials and the potential of the local community, and adapting technology from the industrialized world in a simple way. It was also conceived as a standard model that could be copied within the community and would raise awareness of the merits of traditional materials. 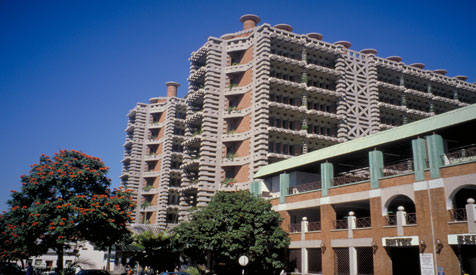 Eastgate Centre, Harare, Zimbabwe | Mick Pearce and Arup
Largely made of concrete; the Eastgate Centre has a ventilation system, which operates similarly to the self-cooling mounds of African termites. As well as bio-mimicry the building takes inspiration from indigenous Zimbabwean masonry. Without conventional air-conditioning or heating the building stays regulated all year round, dramatically reducing energy consumption. The building uses 10% of the energy a conventional building of its size would use. The owners of Eastgate have saved $3.5 million because of the use of natural ventilation and this has trickled down to the tenants who are paying 20 per cent less rent than occupants of surrounding buildings. 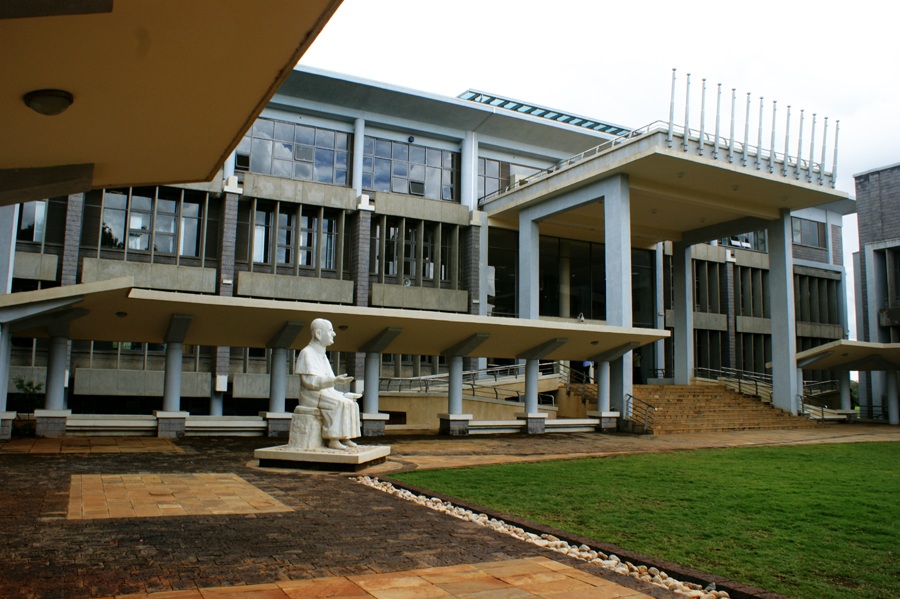 Catholic University of East Africa Learning Resource Centre | Musau Kimeu
This Resource Centre Catholic University of East Africa has tackled these monsters of costs by use of local low embodied energy material, passive cooling of the building, natural and diffused lighting and wind driven chimneys to achieve a space quality that is not just fulfilling as a library but also providing a piece of art and sense of place that meets the intended function way above the expectations. 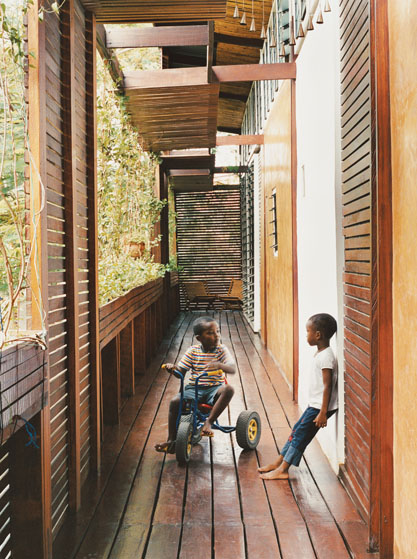 ‘Inno-native’ Home, Accra Ghana | Joe Osae Addo
Joe Osae-Addo was determined to build a beautiful eco-friendly house for his family in Ghana. The house was built with materials found primarily in rural areas: timber and adobe mud blocks. With no air-conditioning, the house has sliding slatted-wood screens and floor to ceiling jalousie windows for cross ventilation. The house is raised three feet off the ground to take advantage of the cooling under floor breeze. Even though the house is connected to the national grid for electricity, solar panels have been installed for backup and for heating water. The house cost $50,000. 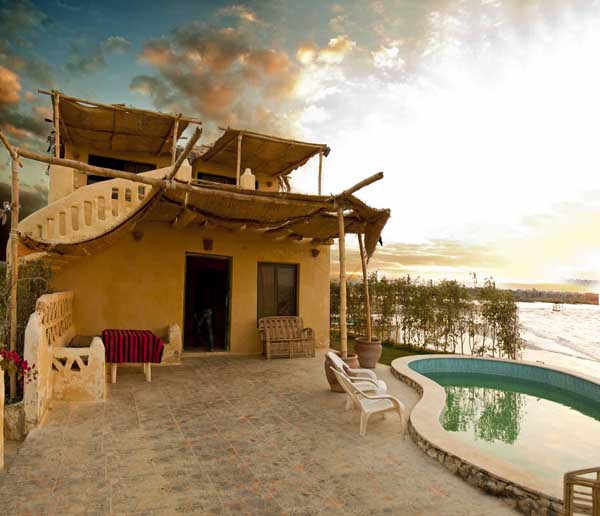 El Mandara eco-resort, Fayoum, Egypt
Egypt is known for its troops of tourist, but this has changed due to instability in recent years and now new ways of attracting tourists are becoming apparent. Eco-tourism is gradually leading the way. This resort was previously a series of rundown buildings, and has now been renovated by a group of young people who saw its potential. They advocated the use of local, sustainable building materials including mud bricks (a la Hassan Fathy) and palm fronds to provide shading from the relentless desert sun. It sits astride Lake Qurun and pays deep respect to its natural surroundings.

Floating School, Makoko, Lagos, Nigeria    | NLE and Kunle Adeyemi
The Floating School will accommodate 100 students, while using 256 plastic drums to keep it resting on top of the water. The frame is constructed with locally-sourced wood and was built by Makoko residents. Once the school is open electricity will be provided by solar panels on the roof, and rainwater harvesting would help operate the toilets. The school is finished, and the cost to build was $6,250. 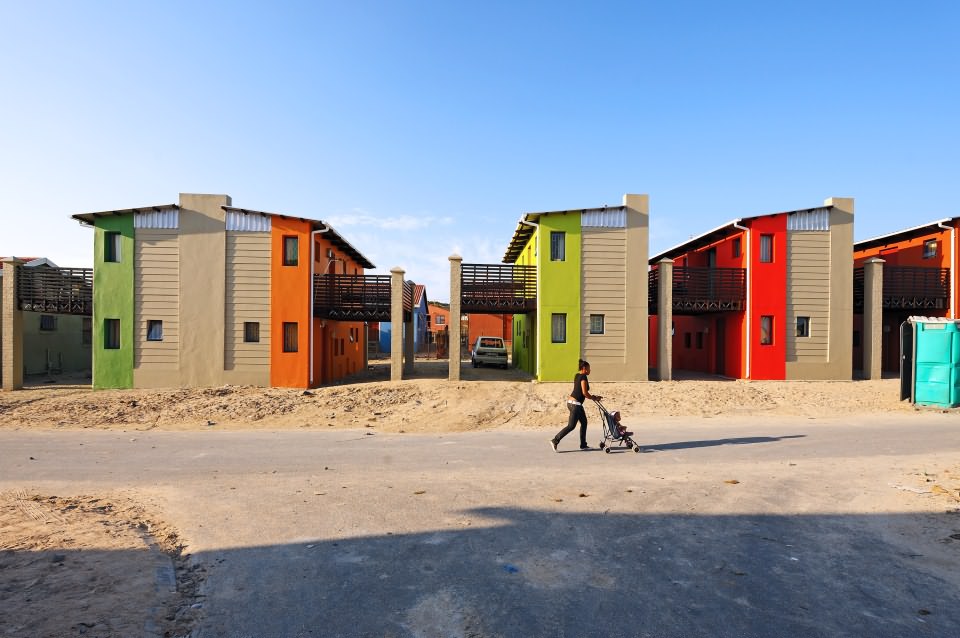 Sandbag Houses, Freedom Park, Cape Town, South Africa | MMA Architects
The aim of a sandbag home is to conserve money and conserve resources. Having been built for $6,000 its aim is being achieved. Inexpensive local materials were used, therefore cutting down on transportation. It was also constructed with the help of its future residents, bringing costs down further. The house was built using the EcoBeams system, which replaces brick-and-mortar with sandbags. It is reported to be a strong, safe and cheap way of delivering affordable housing. 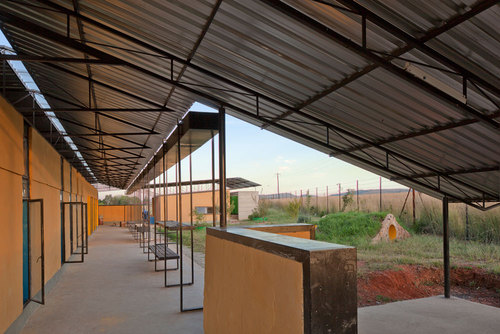 Iphiko Ithuba Primary School |  Art University Linz Student Programme
IPHIKO project is the first phase of ITHUBA Primary School, consisting of two primary classes, a kitchen, a workshop, toilets and a sheltered garden courtyard for the youngest pupils. The large covered outdoor areas have to protect the outdoor lessons and break times before the heavy rains and the intense solar radiation in this region. Designed and built by students at the Art University Linz, the school attends to climate friendly building that is to be without outside energy (heating and cooling) controlled air spaces.