From the Architects:
The house is set on a secluded, tranquil stand surrounded by established trees. The main house consists of 2 wings: the living wing and the bedroom wing. Both wings have long, low roofs which appear to float over and past them. These roofs are supported on external steel posts, as all of the walls stop short of the ceiling, with clerestory windows on top of all internal and external walls. The clerestory windows allow views of the trees from inside the house, and admit a soft, diffused light into the house during the day. 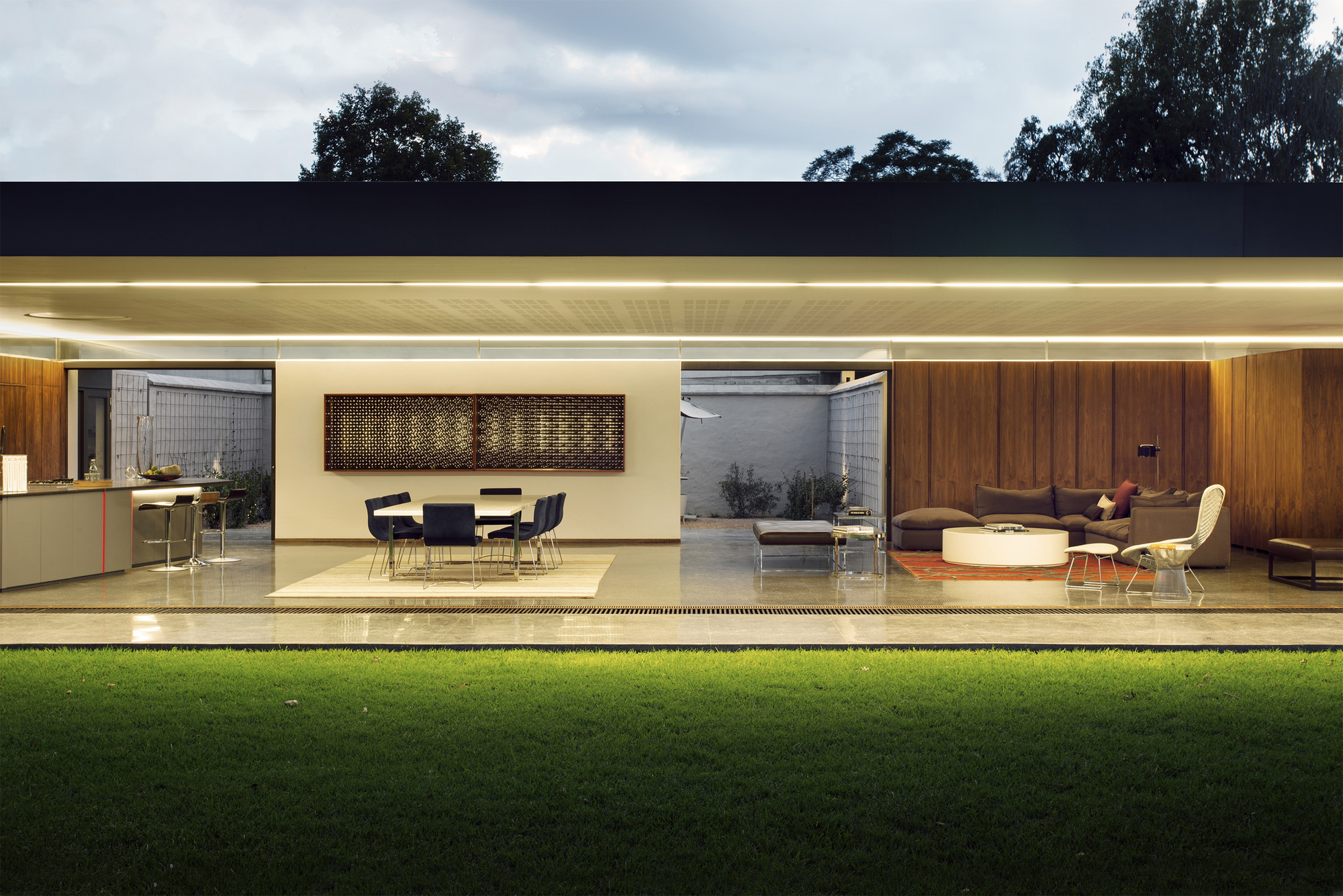 At night, the ceilings are lit up by lights which are concealed below the clerestory windows. This creates a soft, ambient light, and enhances the floating effect of the roofs. The deep overhangs of the roofs and the generous concrete aprons around the house extend the house into the garden both spatially and visually. The deep roof overhangs also shade the glass in summer, protecting the house from solar heat gain. 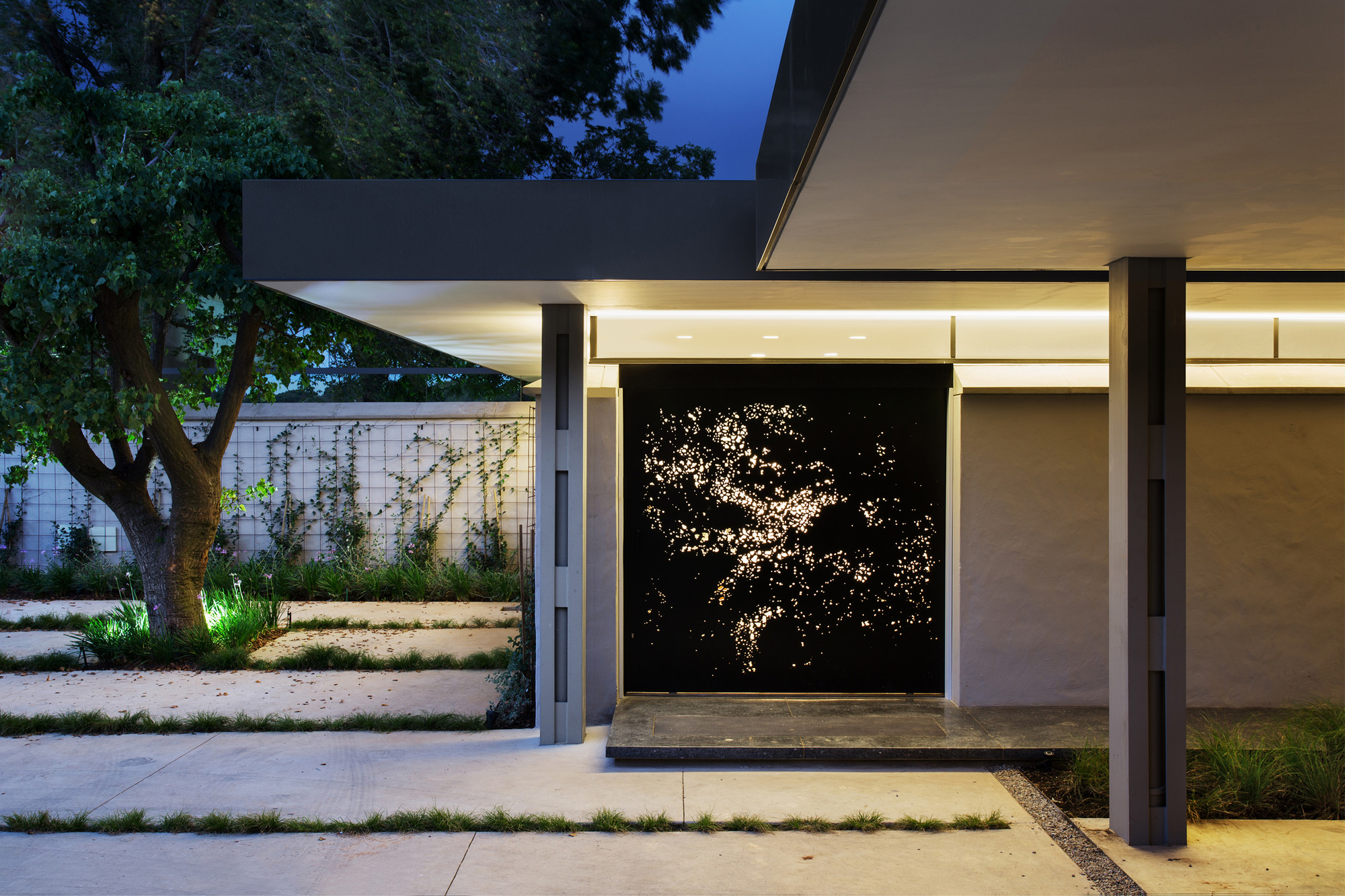 Along the full length of the northern side of the living area is a 16 meter long floor to ceiling motorized frameless glass sliding door. When opened, the door disappears into cavity walls, and the living area effectively becomes an open covered patio, with 2 large cavity sliders on the south side opening onto a secluded courtyard. 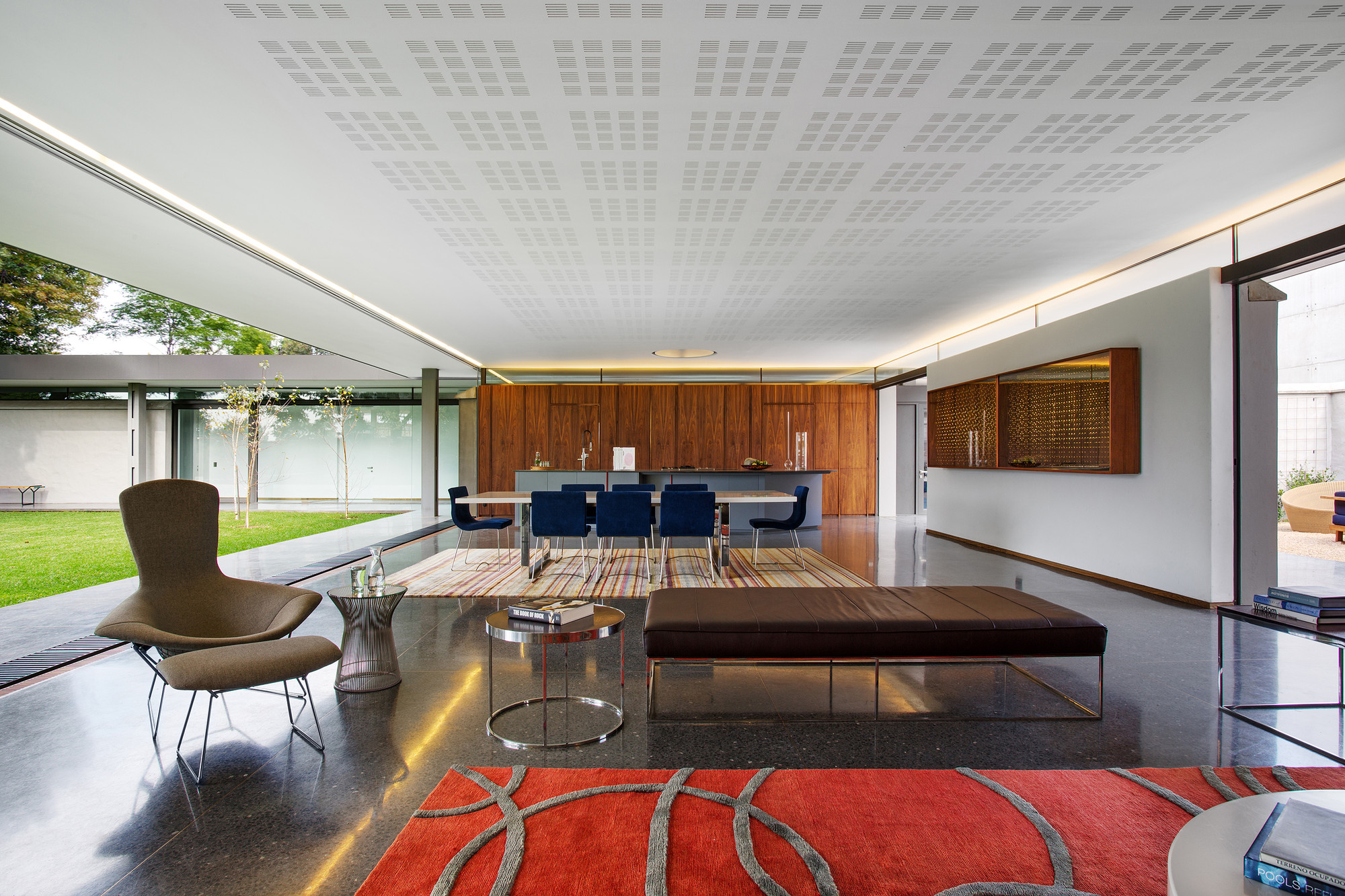 The entrance door was designed by South African artist Marcus Neustetter. It comprises a sheet of laser cut steel on the outside and laser cut walnut on the inside, with clear glass in between to let light shine in during the day and out at night. The laser cut image originates from a Google Earth image showing the topography of Johannesburg and the surrounding areas. 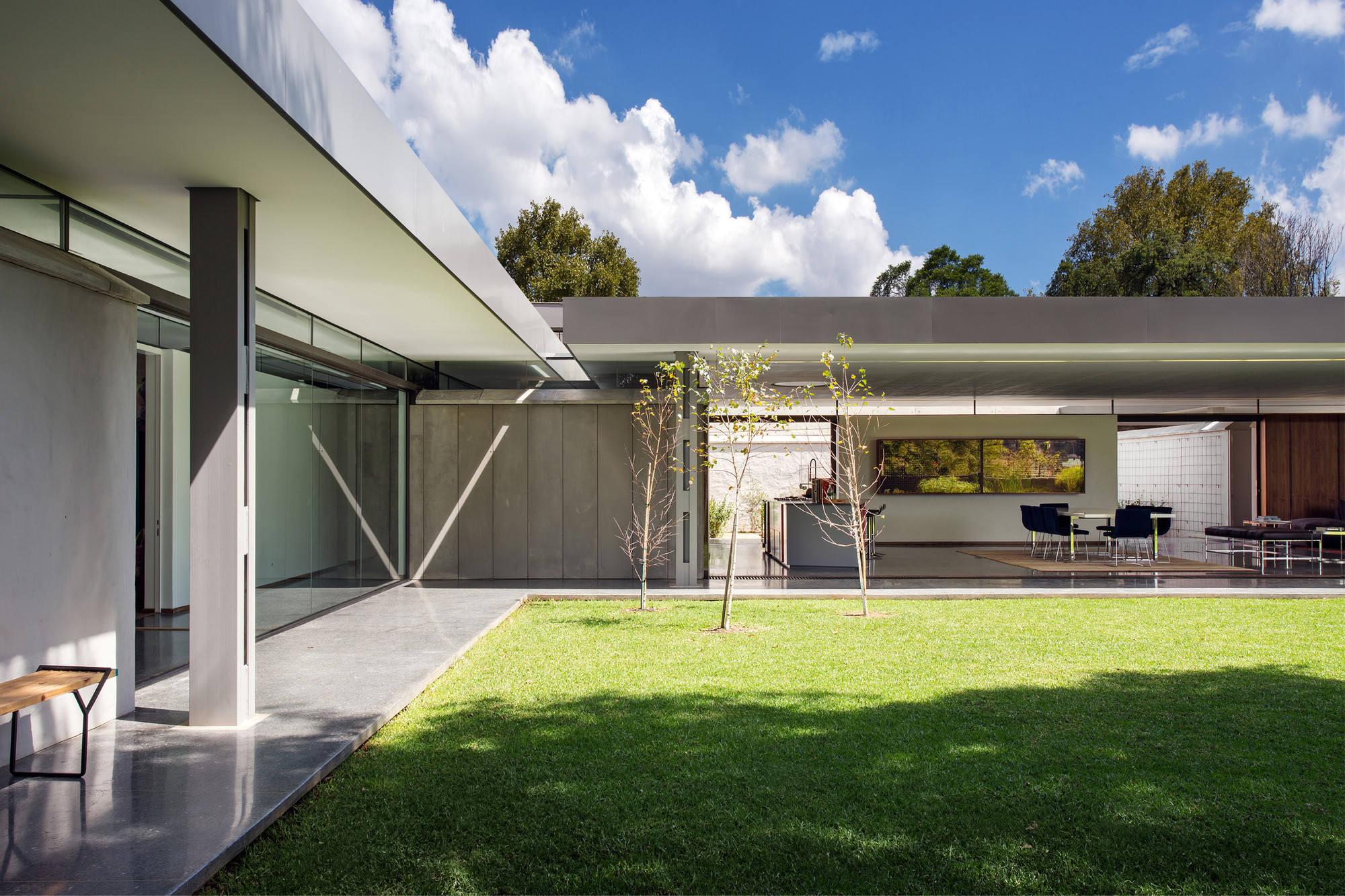 The minimalist architecture, expansive spaces, soft natural daylight and white walls in the house serve as a backdrop for other artwork throughout the house. 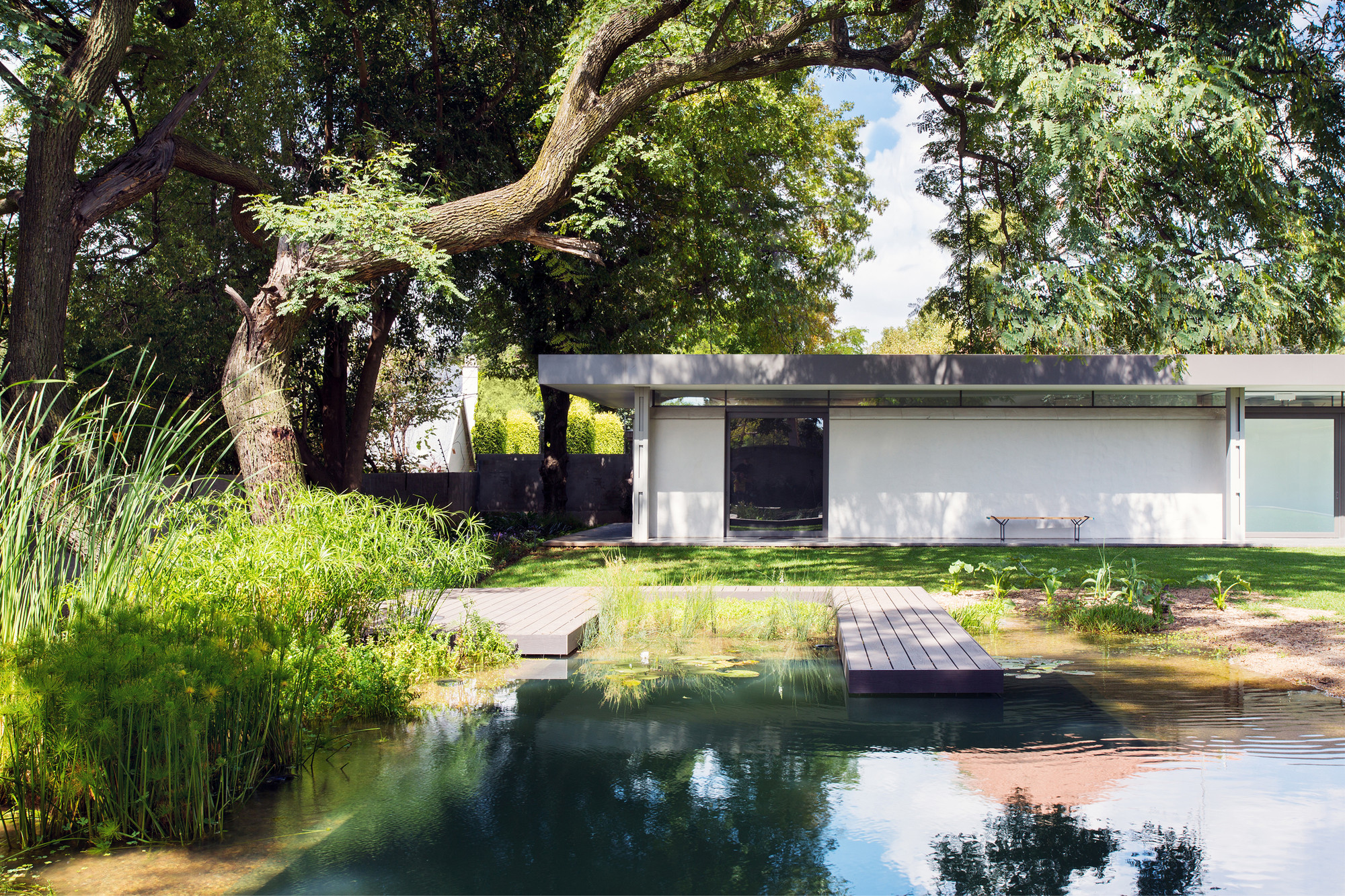 The eco-pool has been designed to read as part of the garden, with gravel banks acting as the transition between the garden and the pool, and planted wetlands blending visually with the surrounding landscaping. 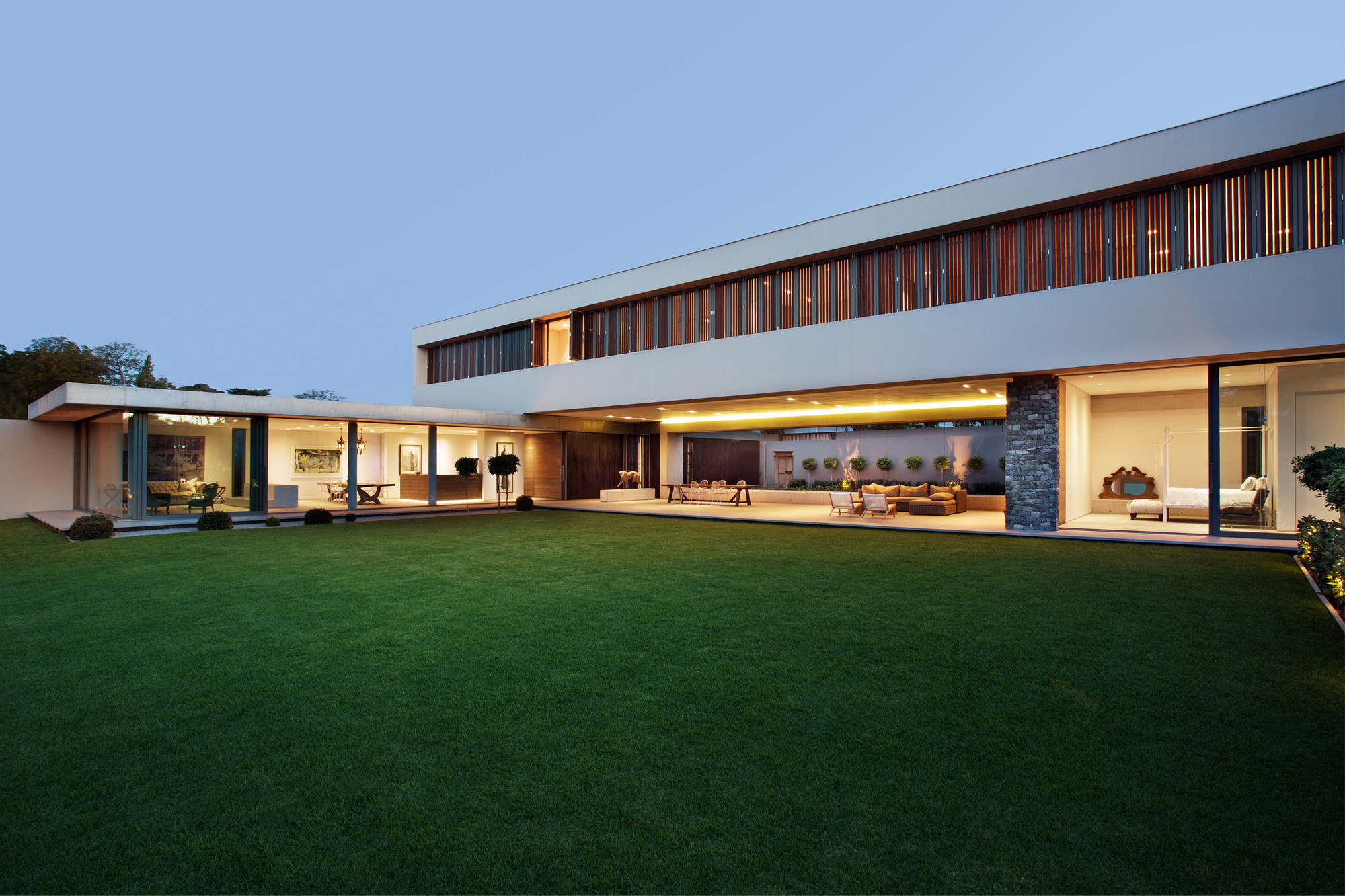