Architecture is the spirit that sets the stage of our lives, it is the way we make an age physically on site, the way the world sees space, form and infuses culture upon its stone, brick, mortar, steel and glass. This is the spirit that Carlo Berarducci seeks to infuse upon the city of Tripoli, now coming off the shells of political turmoil, and he sees this within the European hospital just off the main city of Tripoli.

From the Project Architects:
In a spectacular location on the beautiful Libyan coast not far from the ruins of the archaeological site of the roman city of Sabratha, along the coastal road linking Tripoli toTunis, the Libyan European hospital surgical clinic with conference center is under construction. The project commissioned by Swiss and Libyan private clients has been interrupted in the realization after the events of the revolution, but has not been damaged and today is about to start again despite the difficult situation in the country. The original vision of a project that would establish a new standard of quality in the construction of hospital buildings in libya, remained unchanged as well as the belief that it could start a bridge with Europe through the activity of the conference hall.

The area is a rectangle with the short side bordering the coastal road. The project is characterized by the emphasis of the horizontal planes with a large coverage plan that overtakes the covered volumes supported by circular free columns covering an open triple-height atrium shaded by horizontal Brise soleil (an architectural feature of a building which reduces heat gain within that building by deflecting sunlight.)and cooled by a garden of palm trees. Below the prismatic volume of the conference hall,stretched towards the sea with a fully glazed front, a glass foyer is surrounded by a water basin. Two parallel wings contain the patient rooms on two levels above the ground floor containing the administration and visit rooms. All patient rooms have beds positioned so that they have view of the sea through large windows from floor to ceiling screened from direct sunlight by full-height projecting walls 45 ° over the facade plane. On the back of the area are the operating theater, completely closed to the outside and on the upper floors the visitors doctors apartments. 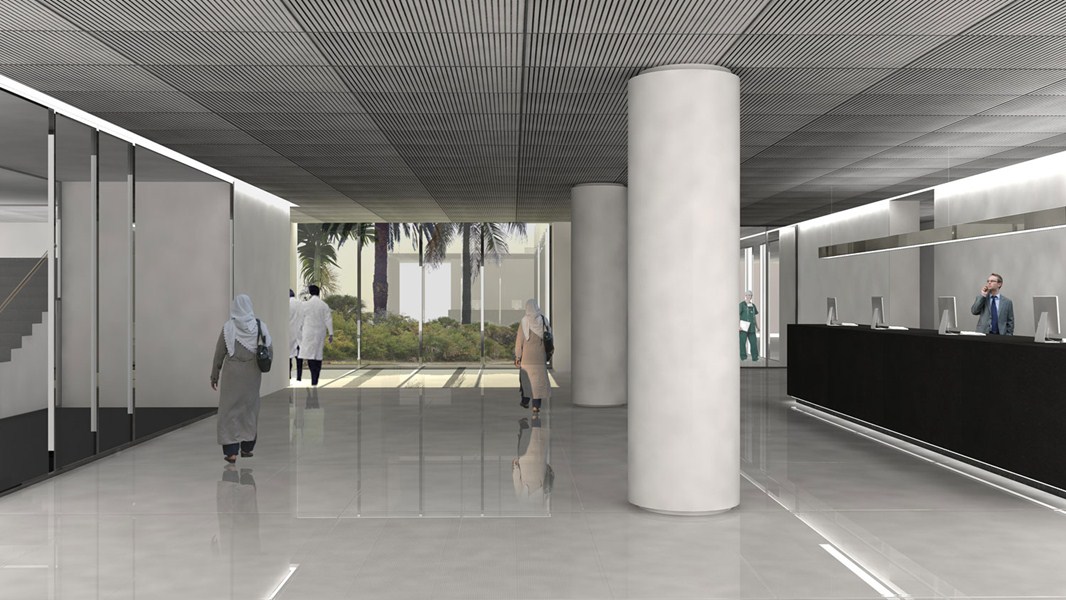 Outside the dominant colors are white and silver. The whiteness of the wall coverings in porcelain stoneware with antibacterial and antipollution action activated by the presence of light and water, and the white granite flooring the silver of the windows frames and the shading Brise soleil together with the horizontal floor plans thickness covered with stainless steel finish. 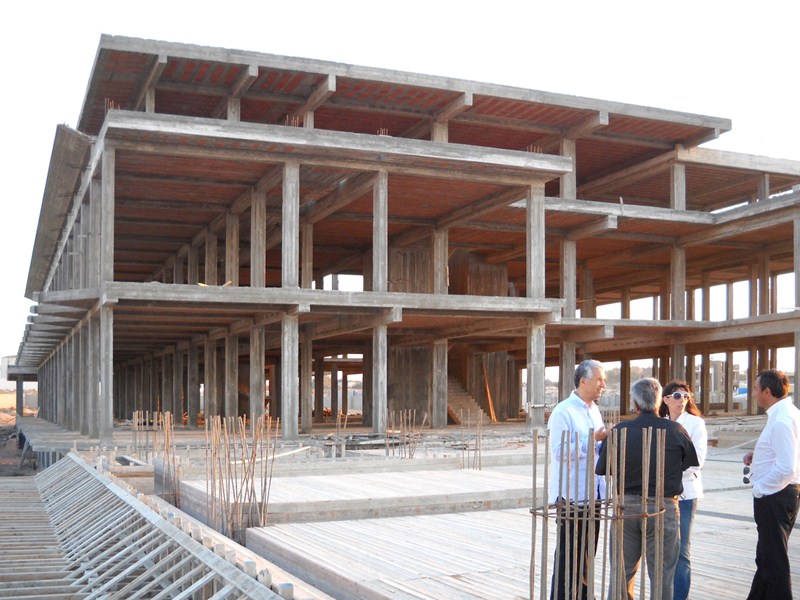 It is an impressive edifice that embodies all the spirits of contemporary design and modern science and technology. Above all else, it sets a standard within the continent, one that gives the face of Libya pride within the architectural circles.