Algeria boasts the third largest mosque in the world in the Grand Mosque, a magnificent edifice that towers above the city of Algiers erected at the present bay of the city. The mosque is a conglomeration of various religious and cultural midpoints and on common ground aligned from west to east in the direction of Mecca in tandem with Islamic tenets. 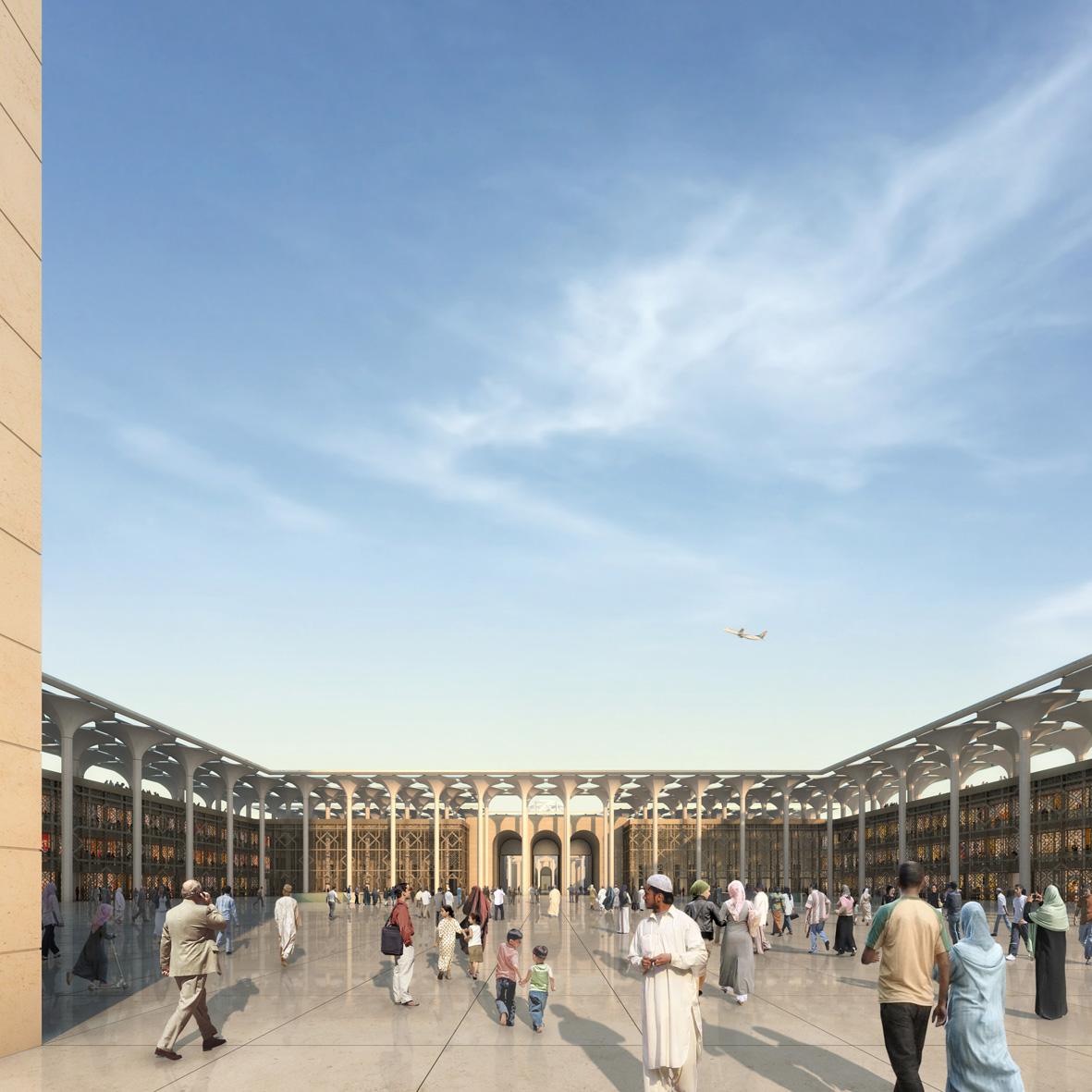 The programme is split into two with the west a place for religious meditation and the east a spatial experience for 35,000 faithfuls to relive their cultural paradigm and status norms. A spacious park leads from the mosque complex to the buildings in the south, namely the cultural centre, the library and the Imam School. 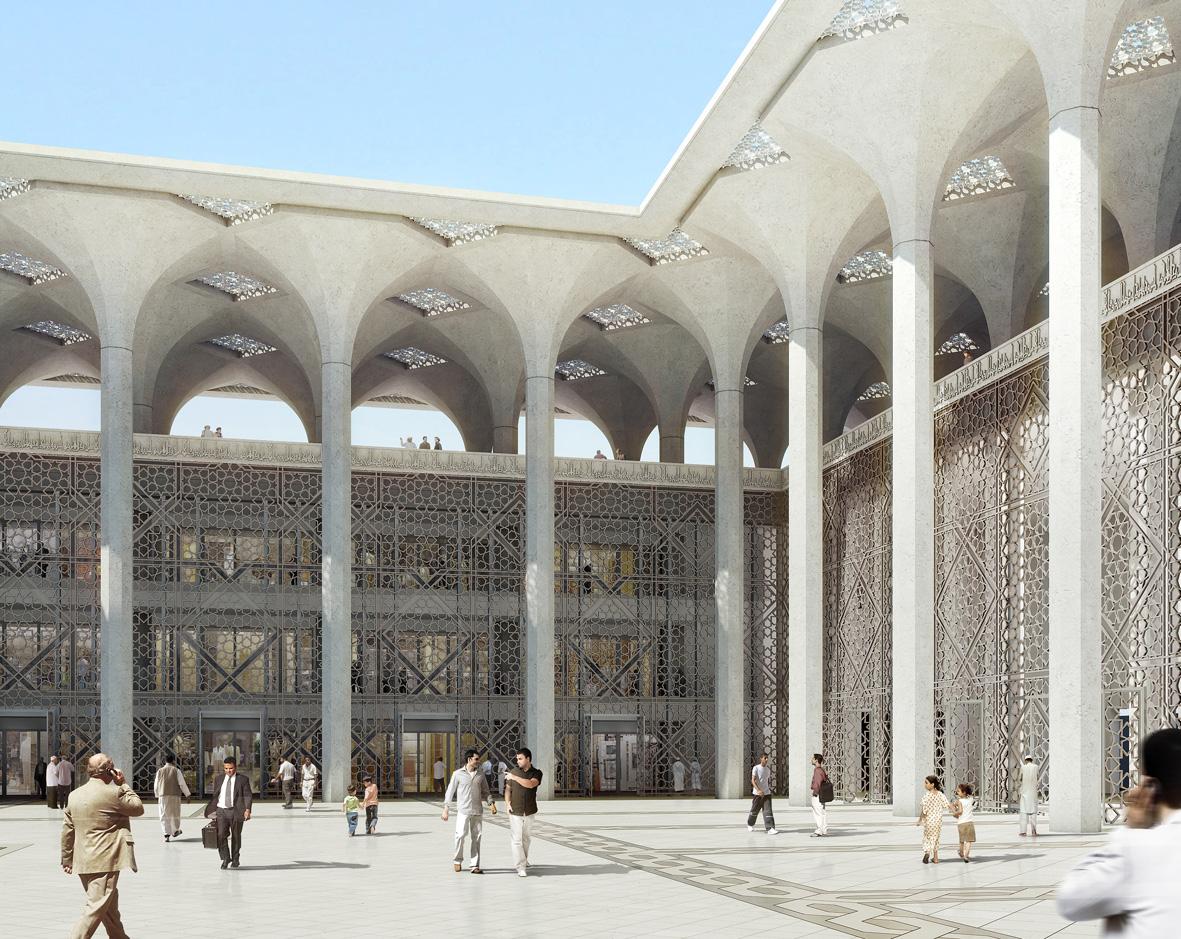 From the Project Architects:
The 265 m height of the minaret and the length of the entire complex create a strong presence in the urban context over a wide area. Located only 6 km east of the historical town centre and not far from the airport, the mosque hosting up to 120,000 visitors a day will encourage the future development of  the adjacent district of the city. 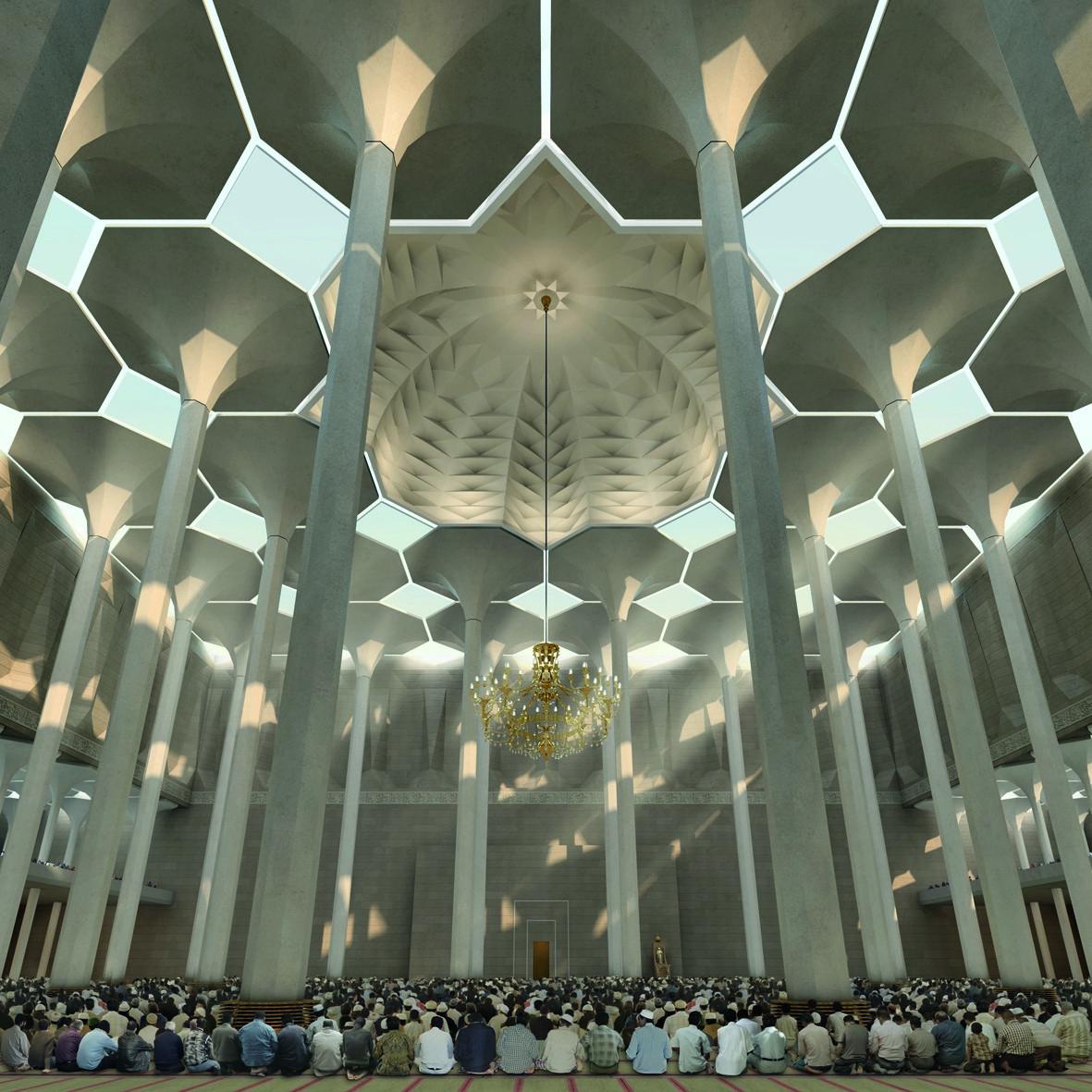 The mosque complex is linked to the buildings in the south, namely the cultural centre, the library and the Imam School, by a spacious park. This landscaped outdoor area can house a large number of people and also offers a haven of tranquillity. Through their alignment and height, the mosque’s ancillary buildings reference the adjoining residential buildings to the south. In the way they are configured they serve as a buffer zone between the city and the mosque park.

The prayer hall or Salle de Prière is a massive cube towering up to 45 m and able to take up to 35,000 people. The interior with its choice materials, restrained ornamentation and indirect natural light creates an impressive spatial experience. All the traditional religious elements such as the Qibla wall, the Mihrab, Minbar and Dikkah are integrated into a hall of modern aesthetics. Daylight from above steeps the hall in continually changing patterns of light and shadow. The interplay of light and shadow is creating a space with a sacred, if not mystical character.

The minaret rises up to some 265 m, and is thus on the same scale as major skyscrapers; once finished, it will be the highest building in Africa. The lower storeys open out invitingly to the plaza and transport visitors by means of panoramic elevators into those upper storeys open to the public, in which the Museum of Islamic History is housed. Above it there are two research areas open to academics only. The multilayered façade is made up of an outer, ornamental skin made of prefabricated, perforated façade elements that protect the glass skin behind from direct solar radiation. The four access routes at the tower’s corners are clad in bright natural stone. The top of the minaret will be transparent. The glass will cover the viewing platforms, one for visitors, the other for V.I.P. guests. They offer a unique view over the city and the sea.

The leitmotif for the design throughout the edifice are floral pillars with protruding capitals in all areas of the ensemble. The floral columns not only blend harmoniously with the local palm vegetation, but combine load-bearing properties with other technical functions: they provide a surface acoustic equipment, while also integrating ventilation and drainage.
The building complex forms a successful combination of Algerian tradition and the present. The mosque brings together the cultural wealth of Islam and Algeria with German excellence in architecture and engineering.