Situated in a remote village in the vast plains of the Dogon country in Mali, Tanouan Ibi Primary School is a perfect example of a design that is innovative, sustainable, functional, practical while still remaining authentic to its context. The school has a single-block typology consisting of three classrooms measuring 7 x 9 meters that can hold a total 180 pupils, a principal’s office, a depot and a sanitary building. It is used for adult education in the evening to train women.

This unique building is appropriately inspired by vernacular Dogon architecture. However, it is realized with rather modern technology and built by local masons. Its construction process was really innovative; the architect had the main contractor and the craftsmen work closely together with the students of the nearby Technical College in Sevaré, resulting in reduced construction costs and exchange of valuable expertise.

Exterior walls are constructed using Hydraulic Compressed Earth Blocks (HCEB) that are produced using soil sourced within the site. Unlike traditional clay walls, HCEB brick-walls are able to withstand heavy rainfall even when not fired. The earth-brick walls are bare with minimal ornamentation and no cladding, exposing the cement binder that hold the bricks together. The result is an earth-colored building that integrates seamlessly into the dry desert landscape.

Its roof pushes the boundaries of mud-brick masonry. The building is roofed with a barrel vault constructed using fired mud bricks with porches on each side as structural support for the impressive vault that spans 7 meters with no reinforcements whatsoever. The architect decided to use a barrel vault to eliminate the need for structural support that would interfere with visibility and circulation within the classrooms. The vaulted roof was also inspired by the domed Dogon hut. In addition to supporting the barrel vault of the roof, these porches act as balconies, insulating the classrooms from the intense solar insolation experienced in the Dogon Plateau during the day. Windows are of operable louvers made from locally sourced wood.

The masonry roof is waterproofed using a mixture of red earth and cement. The roof is not entirely solid. Gargoyles made using locally manufactured ceramic tubes promote stack ventilation cooling the interior during hot days while also allowing in natural light. During the rainy season they are capped to shield the interior against weather elements. In addition to these roof gargoyles, interior spaces are permanently ventilated via long ceramic tubes that also double up as drainage for roof gutters. The result is a majestic building that illustrates just how innovative vernacular architecture can be. 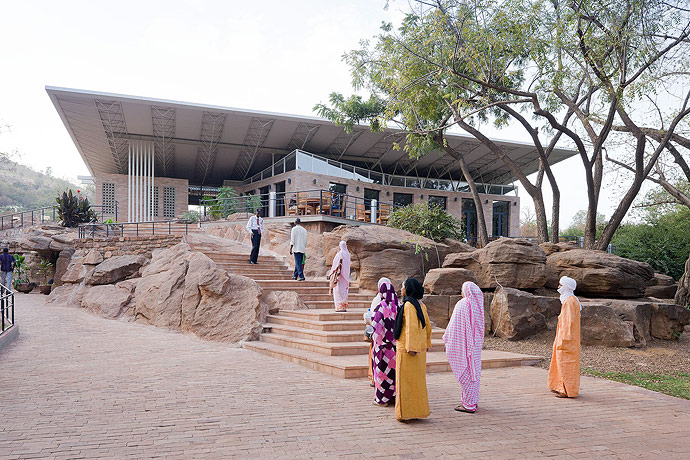