Alehandro Aravena is a man on a mission, one whose ecclectic ideas and immaculate sense of form, space and social engagement in his buildings and spaces has won him the 2016 Pritzker Architecture Prize. He is one of the five members of ELEMENTAL (Alejandro Aravena, Gonzalo Arteaga, Juan Cerda, Victor Oddó, Diego Torres), a Do Tank founded in 2001, focusing on projects of public interest and social impact, including housing, public space, infrastructure and transportation. The firm's A hallmark is participatory design in which the architects work closely with the public and end users. Aravena firmly believes through active practice that architecture can solve social and political conflicts in any sitaution. And so far his projects have shown just that. Here we compile a selected works list of the projects that perhaps the Pritzker Jury considered in the awarding of the award to the Chilean Architect. 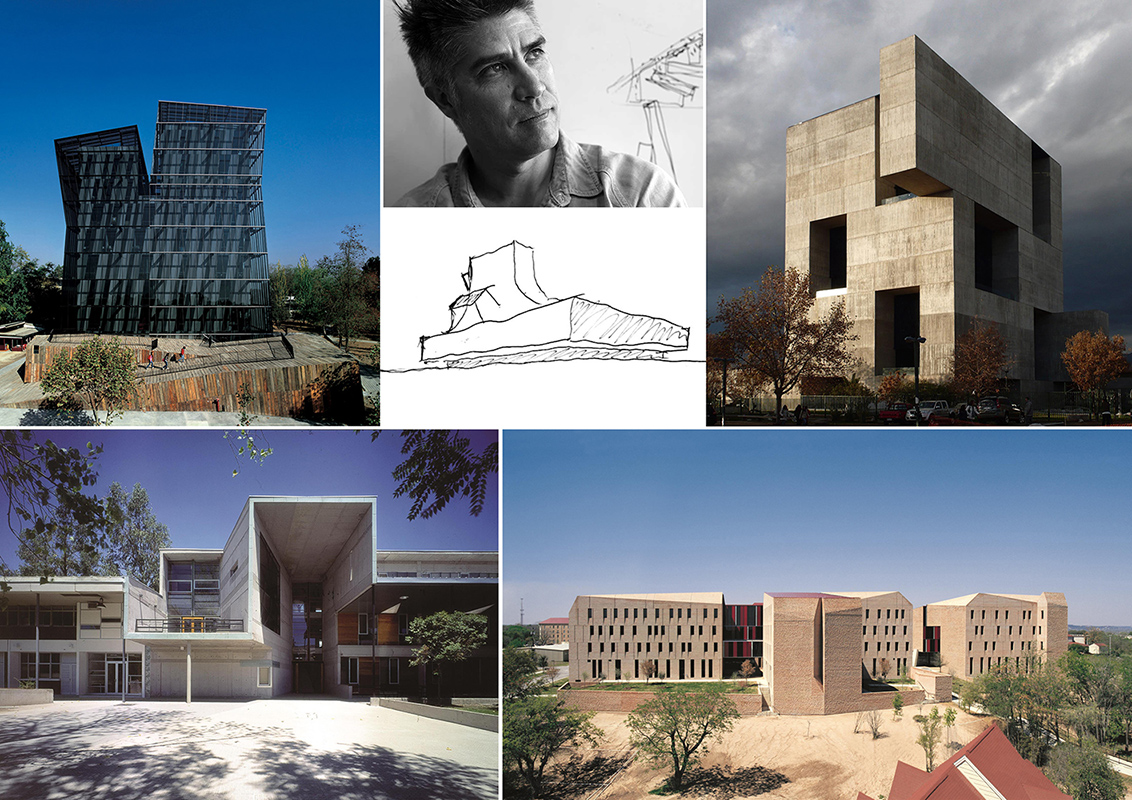 UC Innovation Center – Anacleto Angelini, 2014, San Joaquín Campus, Universidad Católica de Chile, Santiago, Chile. Photo by Nina Vidic.
Ale­jan­dro Ara­ve­na: Innovation and knowledge creation requires on the one hand, to increase the encounters among people, so openness is a desired attribute for its architecture; on the other hand, developments and inventions have to be protected, so security and ability to close and segregate are appreciated architectural conditions as well. We proposed a rather opaque construction towards the outside, which is also efficient for the Santiago weather and then have a very permeable architecture inside. Having the structure and the shafts on the perimeter of the building reverts the typical curtain wall building layout and concentrates openings in a very specific points in the form of elevated squares. 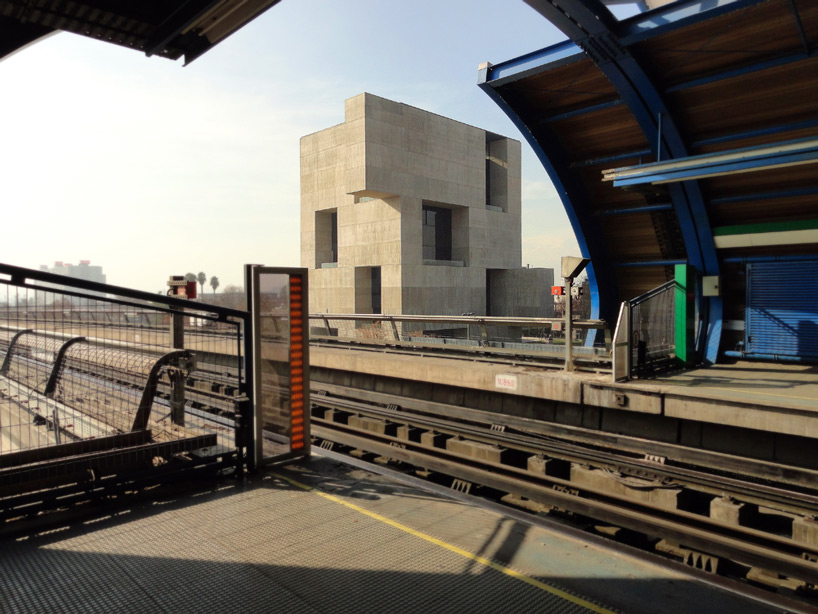 St. Edward’s University Dorms, 2008, Austin, Texas, USA. Photo by Cristobal Palma.
Alejandro Aravena: We needed to accommodate 300 beds, some social areas and some services for the whole campus in a narrow lot. We thought of creating a plinth with the more public facilities to activate the ground floor, then the social areas carving the volume’s core and finally articulate the perimeter of the building as much as possible, increasing the linear meters of façade in order to guarantee views and natural light to each room. To be able to resist a tough environment we opted for a sequence of skins that are hard and rough in the outer layer and become softer and more delicate while moving towards the core. 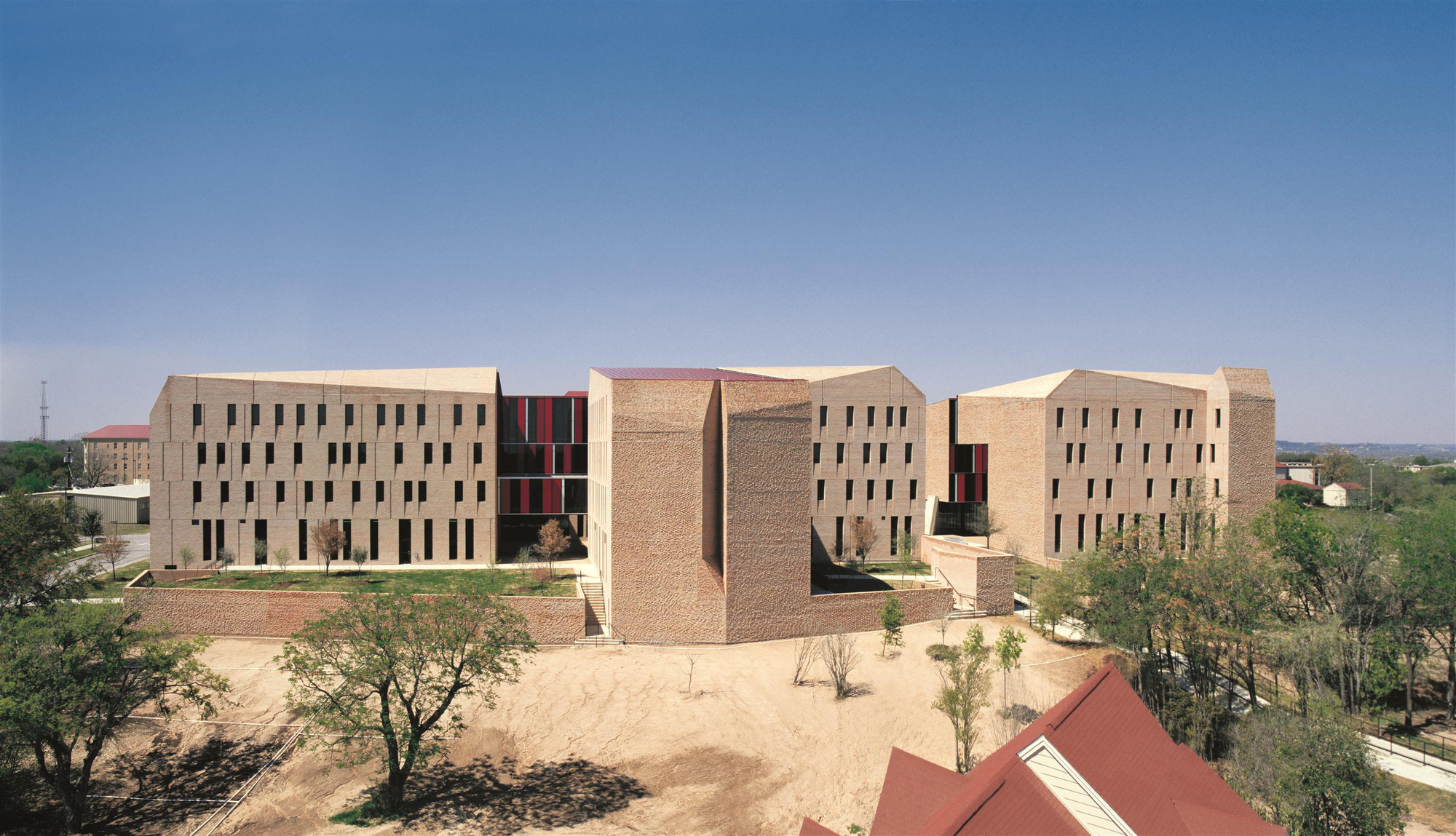 Villa Verde Housing, 2013, Constitución, Chile. Photos by ELEMENTAL.
Alejandro Aravena: Arauco Forest Company asked us to develop a plan to support their employees and contractors so they could have access to home ownership, in the context of Chilean housing policies. This allowed us to work for the first time with the high end of housing policy. Given the greater availability of resources, instead of taking one of our less expensive housing units and delivering it more finished, we applied again the same principle of incremental housing, but with an initial and final growth scenario of a higher standard: these houses begin with an initial area of 57 m2 and can grow up to 85 m2. 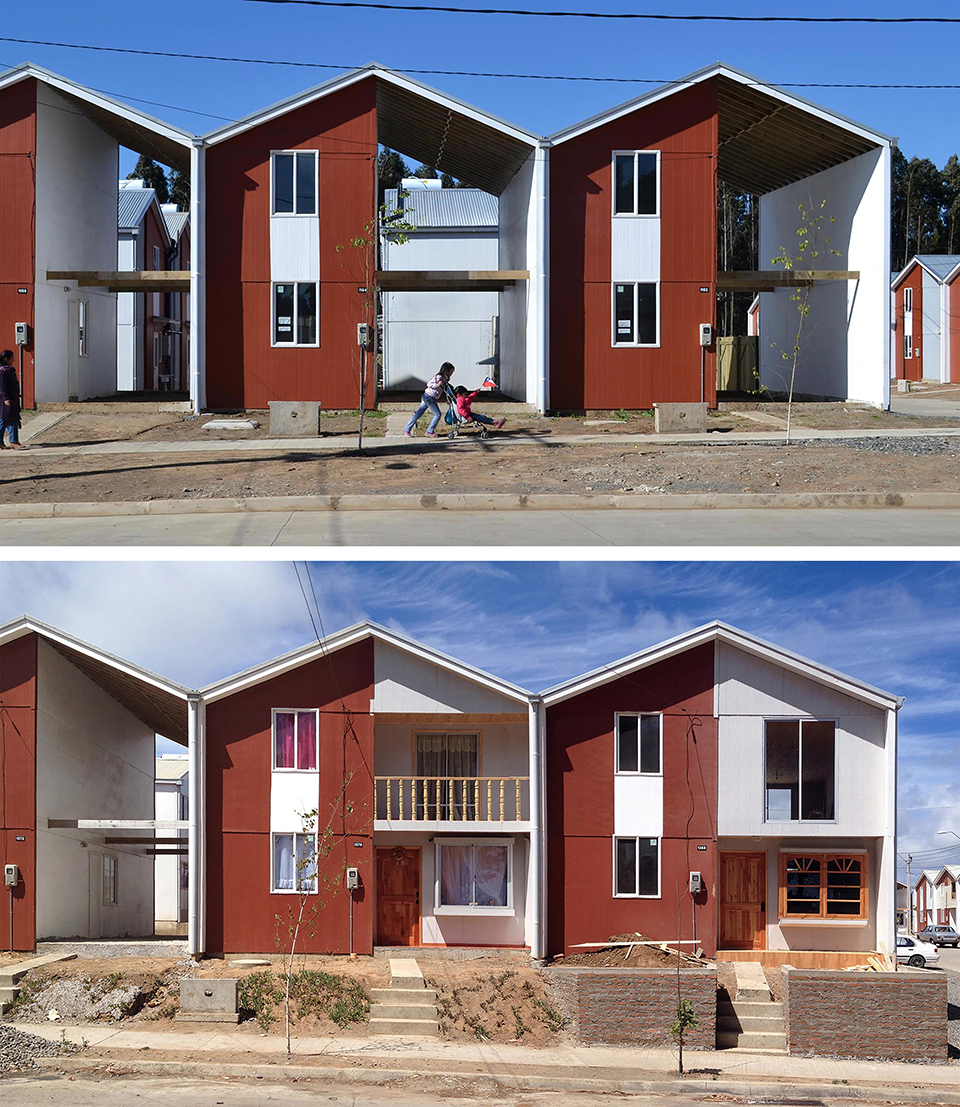 Ocho Quebradas House, 2013 - ongoing, Los Vilos, Chile. Rendering by ELEMENTAL.
Alejandro Aravena: A weekend house is ultimately a kind of retreat where people allow themselves to suspend the conventions of life and go back to more essential living. … As architects, we have been trying to be as primitive as possible lately; in an era where the hunger for novelty is threatening architecture to become immediately obsolete, we are looking for timelessness. … We expect these pieces to age as a stone, acquiring some of the brutality of the place but still being gentle for people to enjoy nature and life in general.

Novartis Office Building, 2015 (under construction), Shanghai, China. Photo by ELEMENTAL.
Ale­jan­dro Ara­ve­na: The office building in the Novartis Campus Shanghai seeks to provide spaces that encourage knowledge creation. The office spaces are designed to accommodate the different modes of work — individual, collective, formal and informal — and foster interaction between the users. Around a forest of Metasequoias, the ground floor accommodates the Fitness and Be Healthy Center which are part of the campus public level where users from the different buildings meet. The outside of the building responds to the local climate with a solid facade of reclaimed brick facing south, east and west. On the north facade, the building is open to let indirect light get inside the open office spaces. 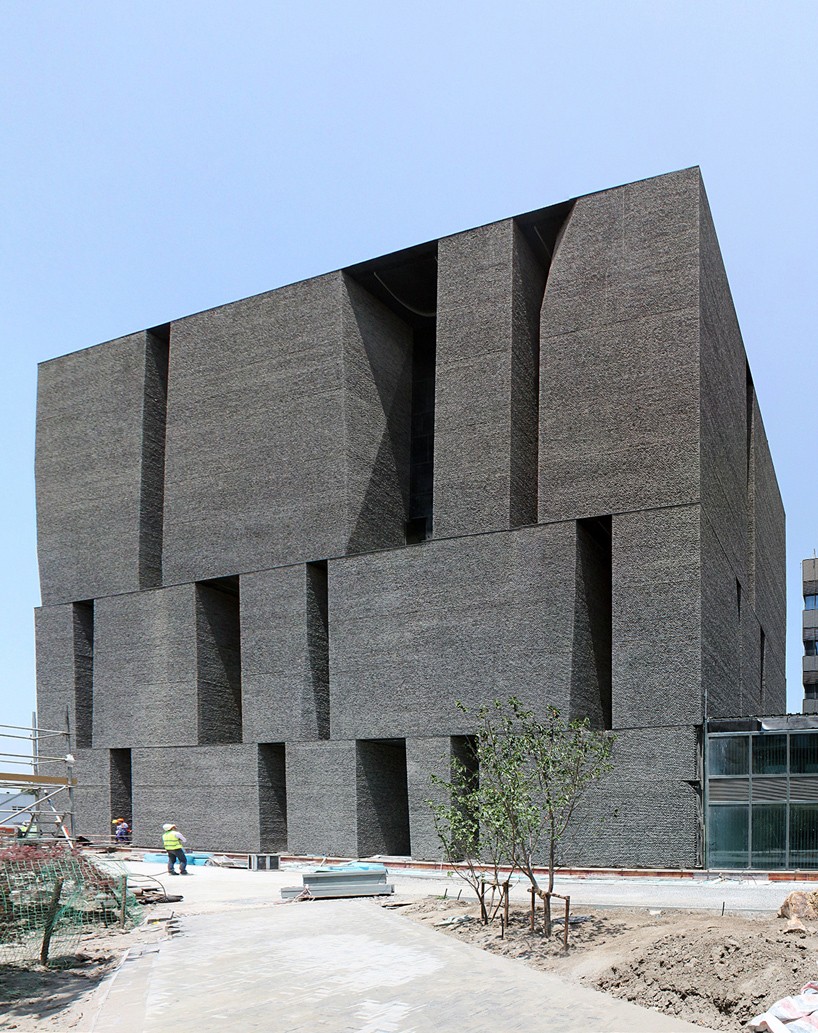 Siamese Towers, 2005, San Joaquín Campus, Universidad Católica de Chile, Santiago, Chile, University classrooms and offices. Photo by Cristobal Palma.
Ale­jan­dro Ara­ve­na: We were asked to do a glass tower. Glass is very inappropriate for Santiago’s climate, because it generates green house effect, even though it’s a nice material to resist rain, pollution and aging. So we thought of using glass for what it’s good, on the outside, then do another building inside with efficient energy performance and allow air to flow in between the two. Convection of hot air creates a vertical wind which is accelerated by the “waists” of the building by Venturi effect, eliminating undesired heat gains before they reach the second building inside.

The Jury Citation for Aravena's work clearly summarizes his ambition.
"The younger generation of architects and designers who are looking for opportunities to affect change, can learn from the way Alejandro Aravena takes on multiple roles instead of the singular position of a designer to facilitate a housing project, and by doing so, discovers that such opportunities may be created by architects themselves. Through this approach, he gives the profession of architect a new dimension, which is necessary to respond to present demands and meet future challenges of the field.

Alejandro Aravena epitomizes the revival of a more socially engaged architect, especially in his long-term commitment to tackling the global housing crisis and fighting for a better urban environment for all. He has a deep understanding of both architecture and civil society, as is reflected in his writing, his activism and his designs. The role of the architect is now being challenged to serve greater social and humanitarian needs, and Alejandro Aravena has clearly, generously and fully responded to this challenge. For the inspiration he provides through his example and his contributions to architecture and humanity past and future, Alejandro Aravena is the recipient of the 2016 Pritzker Architecture Prize." 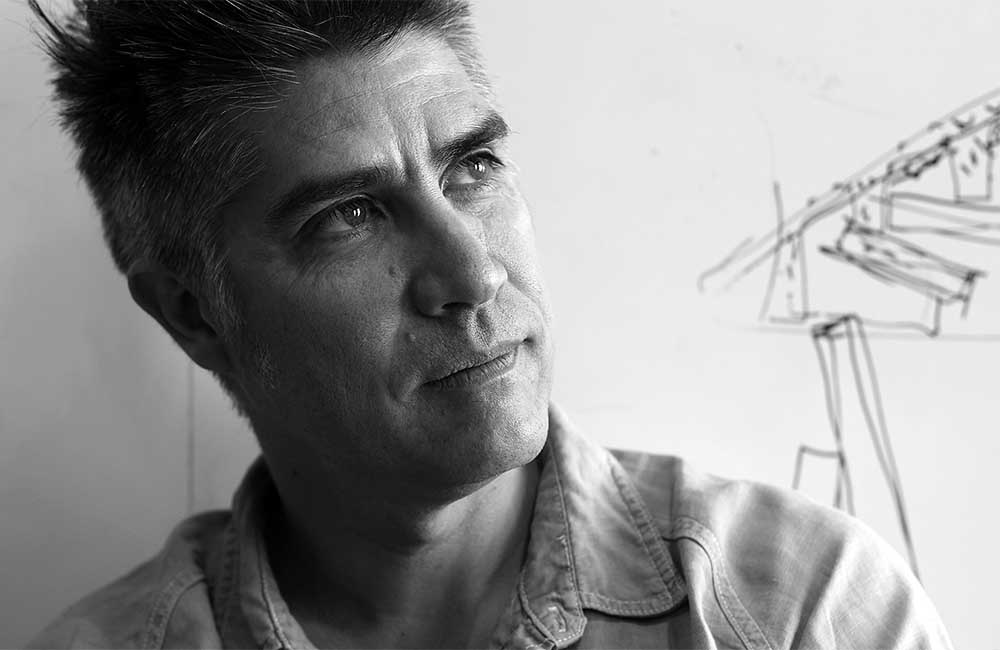