From the Architect:
The prayer and meditation pavilion is an integral part of the recently realized Cardiac surgery centre in Sudan, built by the Italian humanitarian organization, EMERGENCY NGO. The complex, planned and designed by Tamassociati architecture studio, is the only one of its kind to provide free health-care to patients in an extensive area within a ten million square km. radius and counting three hundred million inhabitants. 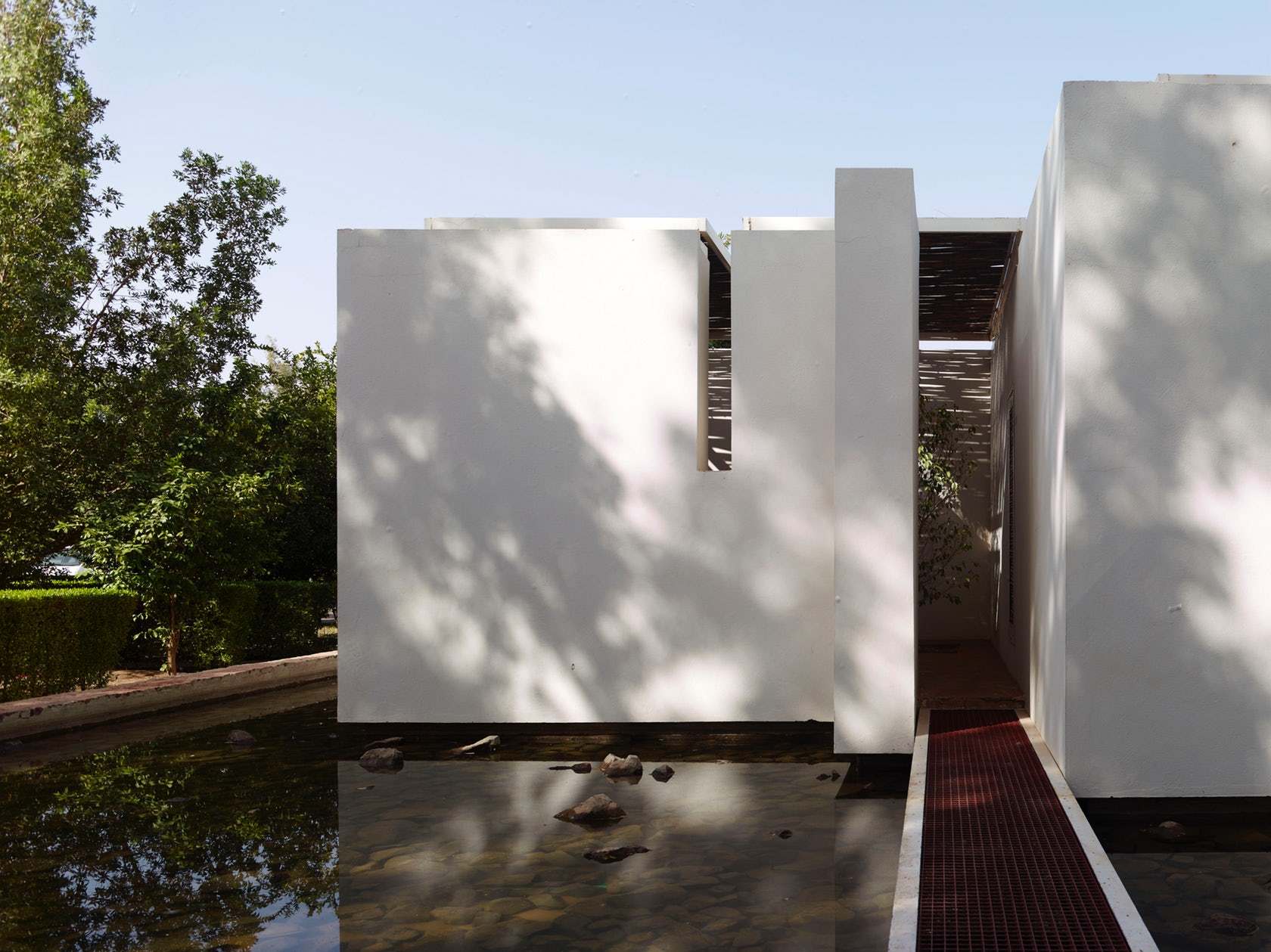 The Popular Republic of Sudan is a country that, over the past twenty years, has been scourged from numerous Inter-ethnic as well as Inter-religious wars. 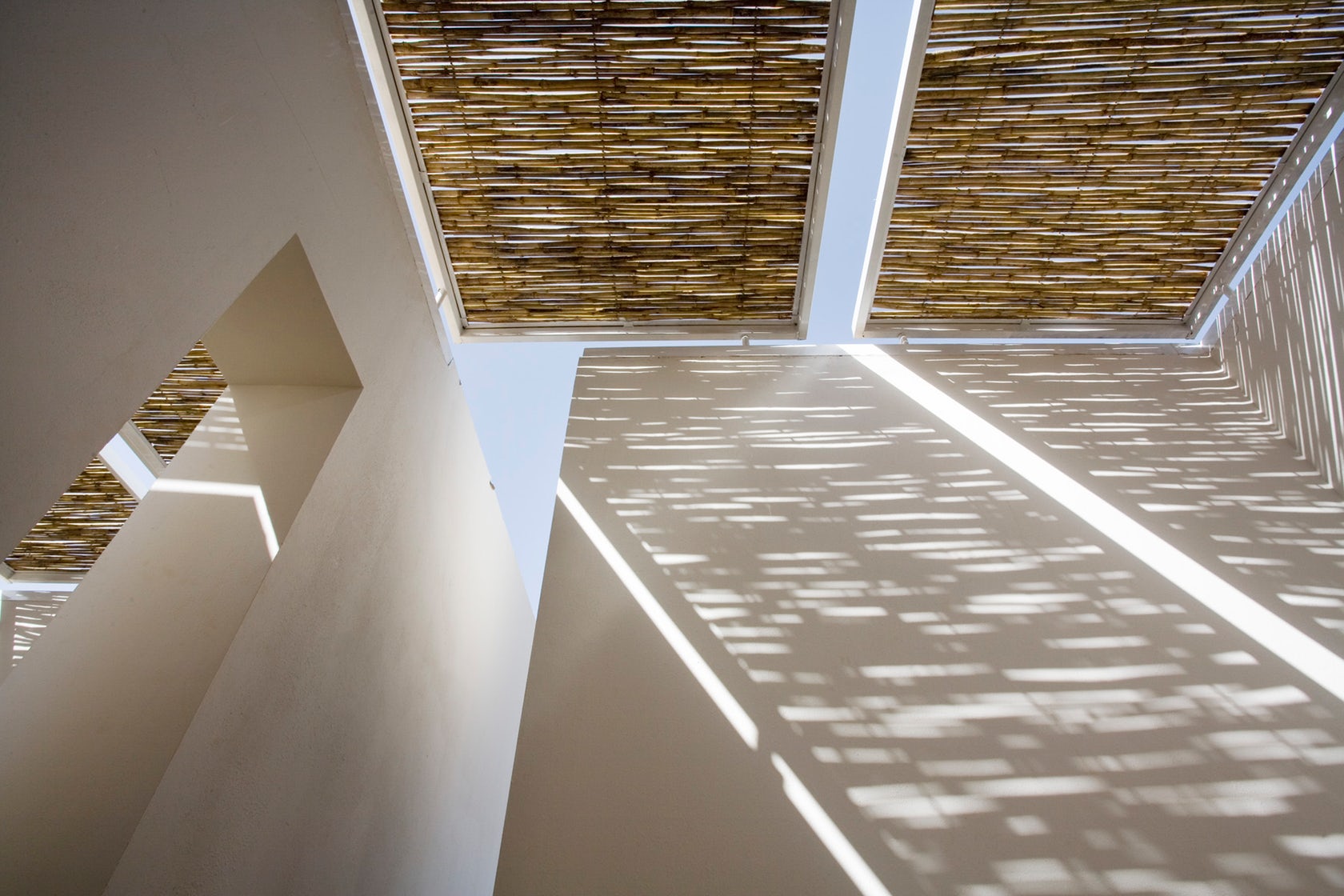 The Arab Ethnic group constitutes 39% of the population and 61% of Africans; and in terms of religion, 70% of people in Sudan are Muslim, while the remaining 30% are Christian or belonging to other religious faiths ("Human Rights Watch": Q&A: Crisis in Darfur 05/05/2004). 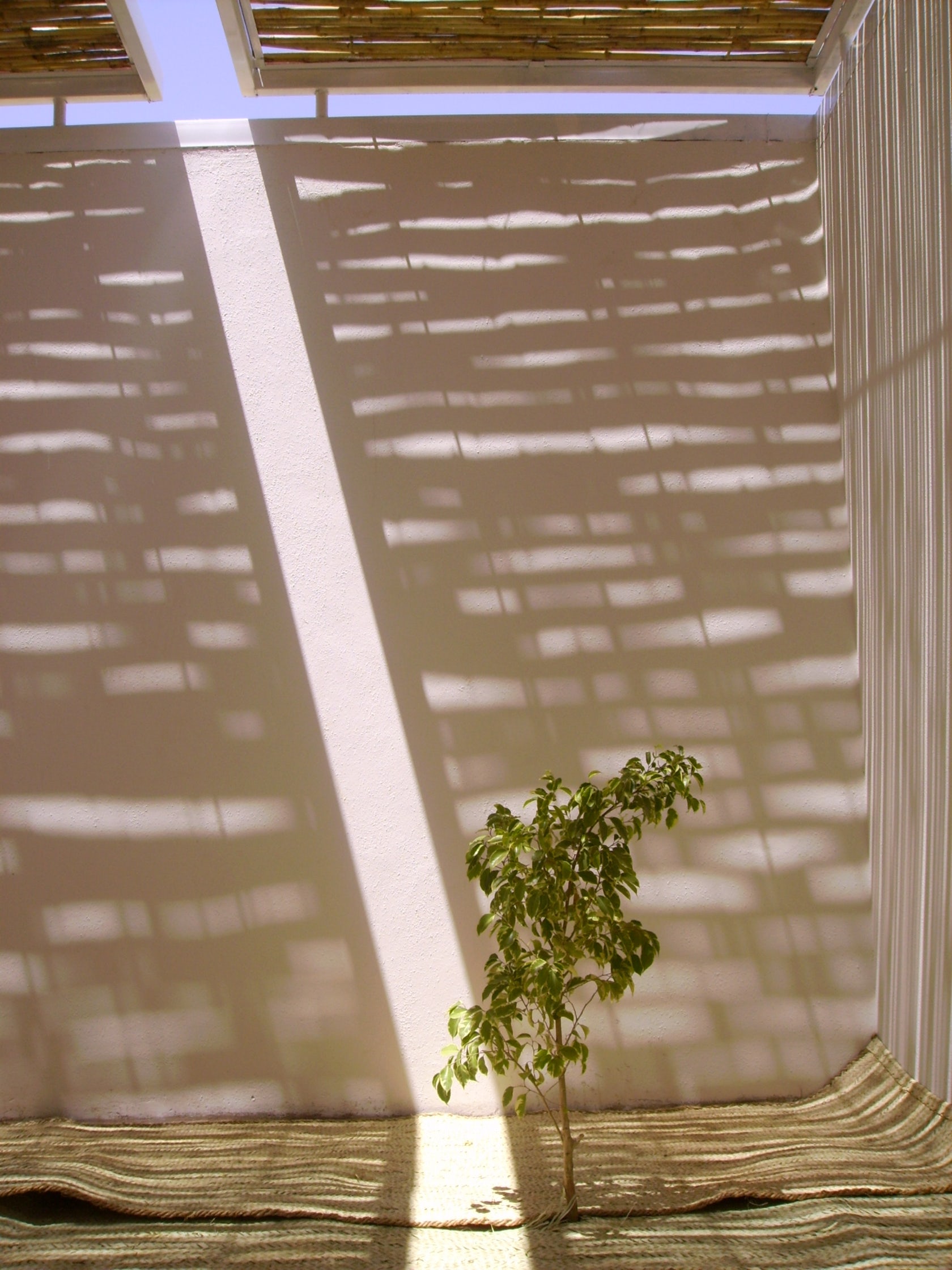 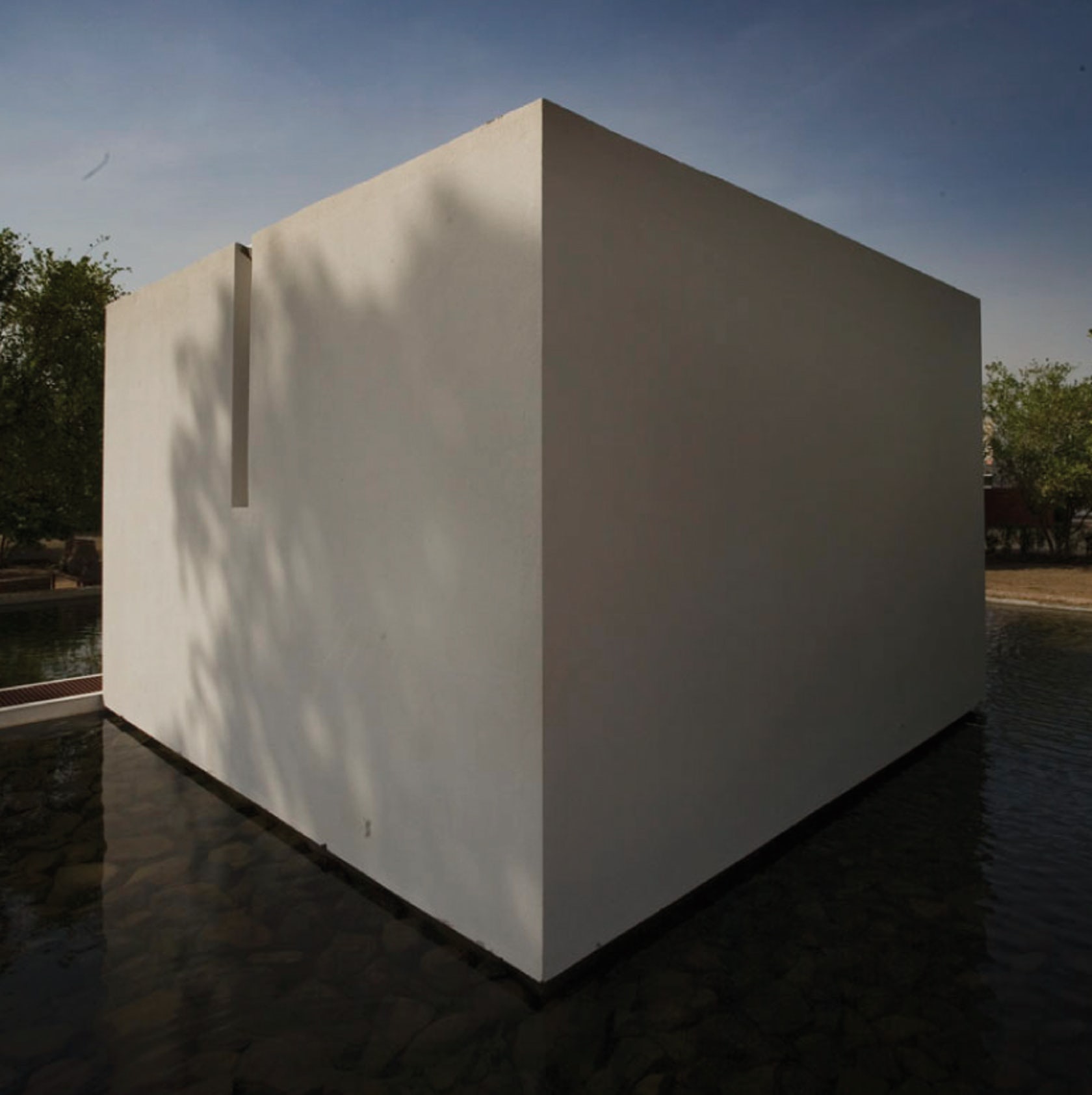 The outside hosts a large water pool, as a strongly symbolic image in this sub-Saharan zone. The pool creates a spiritual separation between the external macrocosm of the hospital/world and the ventral microcosm of the building formed by two unaligned white cubes, which are connected by a semi-transparent cover of palm leaf stalks. 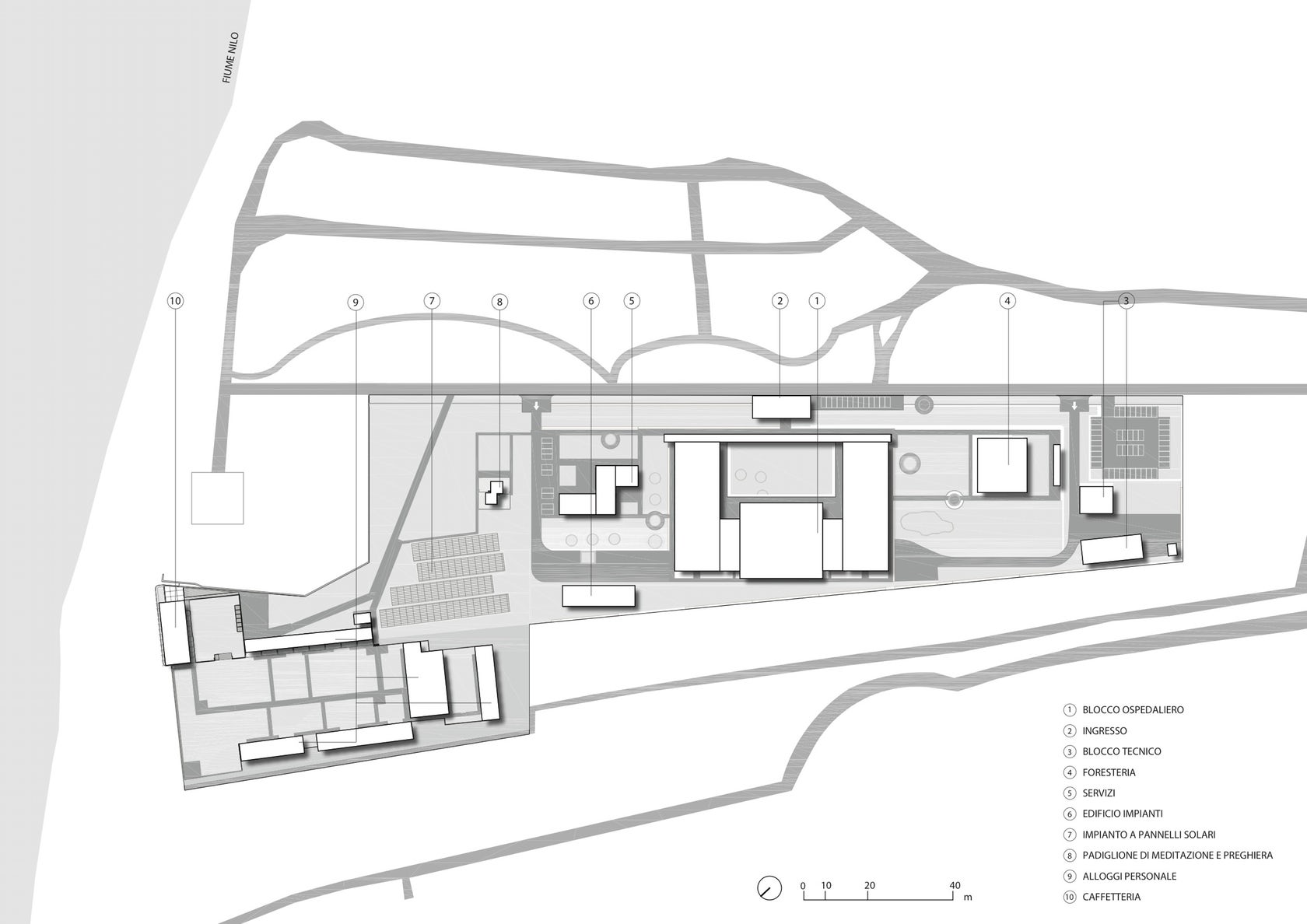 The inner parts of the two cubes contain two trees, which render these profane spaces sacred with their presence, as natural elements inside artificial spaces. We obviously had to seriously consider the Muslim faith, which is the religion of the majority of the Sudanese, along with the religion's rules (ablutions, separation of men and women), but we decreased the contextual impact of those rules in order not to make them appear dominant. This was made possible by concealing all symbols and elements that are specific to only one religion. For example, the ablution area is nothing more than a higher water spray that, before entrance, allows for washing without connoting a strong religious symbol, and it is simply perceived as an element of the water pool.