“We are great admirers of Madrasa Ben Youssef Islamic College in Marrakech, and we wanted to lend the entrance a similarly perfect symmetry,
Gilles & Boissier

From the Architects:
Mandarin Oriental, Marrakech is set amid lush, lavish gardens surrounded by a walkway that allows guests to fully appreciate their charms. An avenue lined with palm trees provides a spectacular entrance, referencing the traditional Moroccan palm groves, while small mounds recall the dunes of the South Moroccan desert. Scattered among the palm trees, pink bougainvillea are cut into Japanese shapes in a nod to the group's Asian origins. 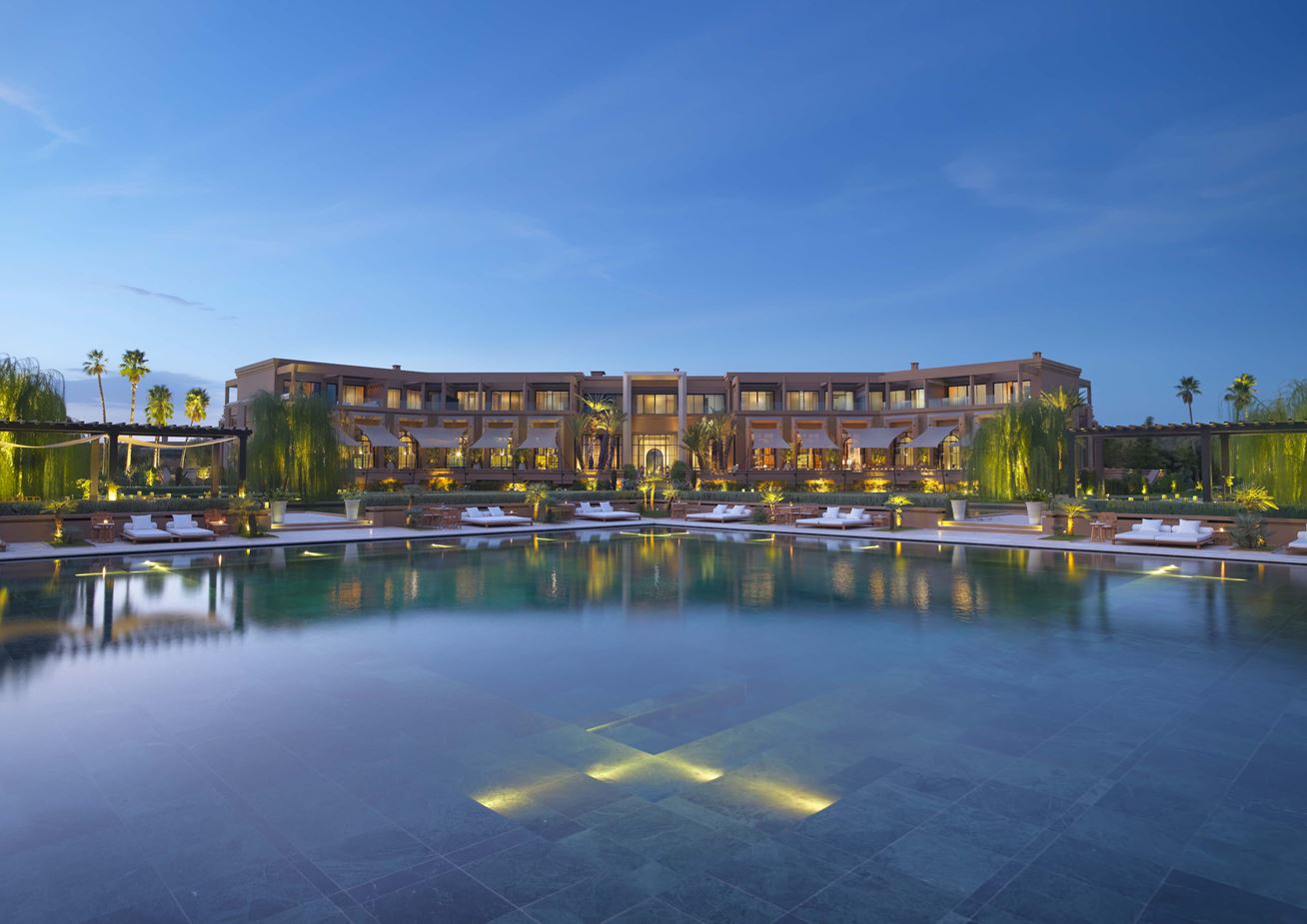 No less than 100,000 different coloured roses of 30 different varieties adorn the garden, and each villa has a rose colour of its own. 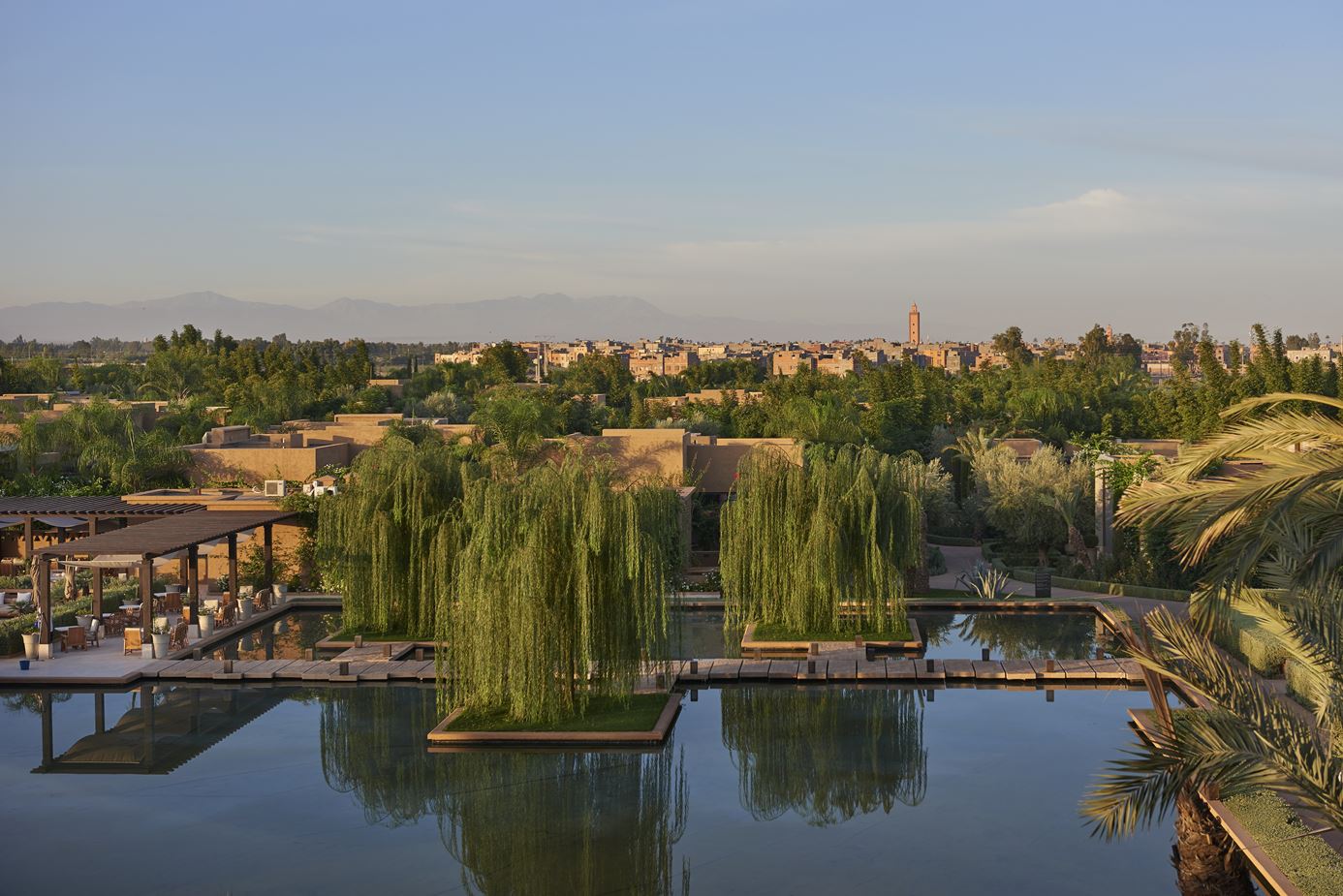 The gardens are home to orange trees, almond trees and many fragrant plants such as jasmine, rose geranium and night-blooming cestrum, so named because at night, its perfume is particularly pronounced, and can be recognised from up to 20 metres away. At nightfall, illuminated by countless candles and lanterns scattered throughout the property, the gardens hold a particular magic as the flowers and plants release their essences.

The garden’s centuries-old olive trees (some of which are up to 600 years old) are now yielding a promising first crop for olive oil. Cactus and prickly pear, traditionally used as natural fences in mountain villages, also dot the area, and their fruits can be enjoyed in icecream in the restaurant, while the oil is incorporated into traditional rituals at The Spa. 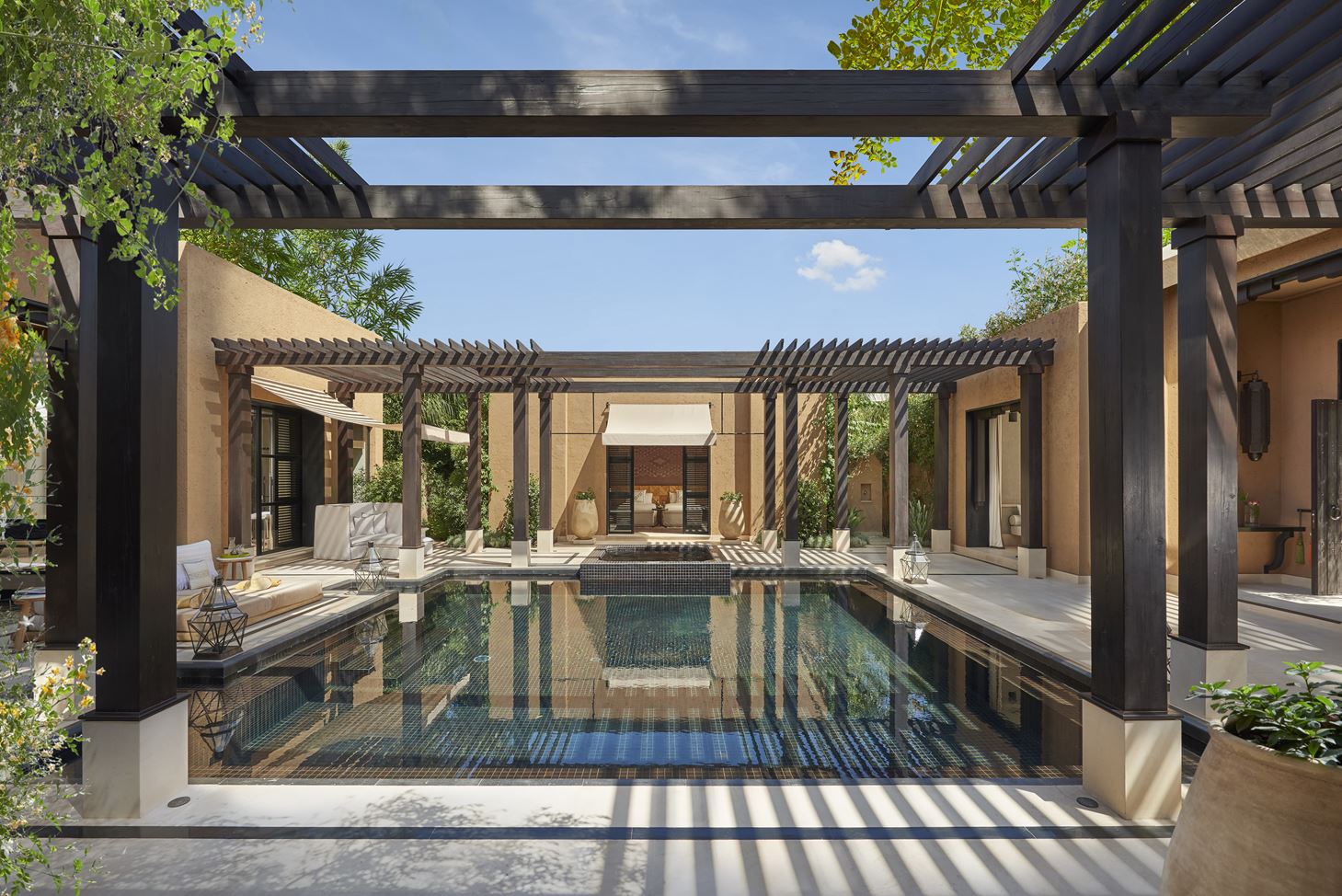 Rustic yet sophisticated, the design of Mandarin Oriental's interior concept was undertaken by the French duo Patrick Gilles and Dorothée Boissier working under the scope created within the architectural input by Pascal Desprez in a scheme he calls calm and full of sobriety . 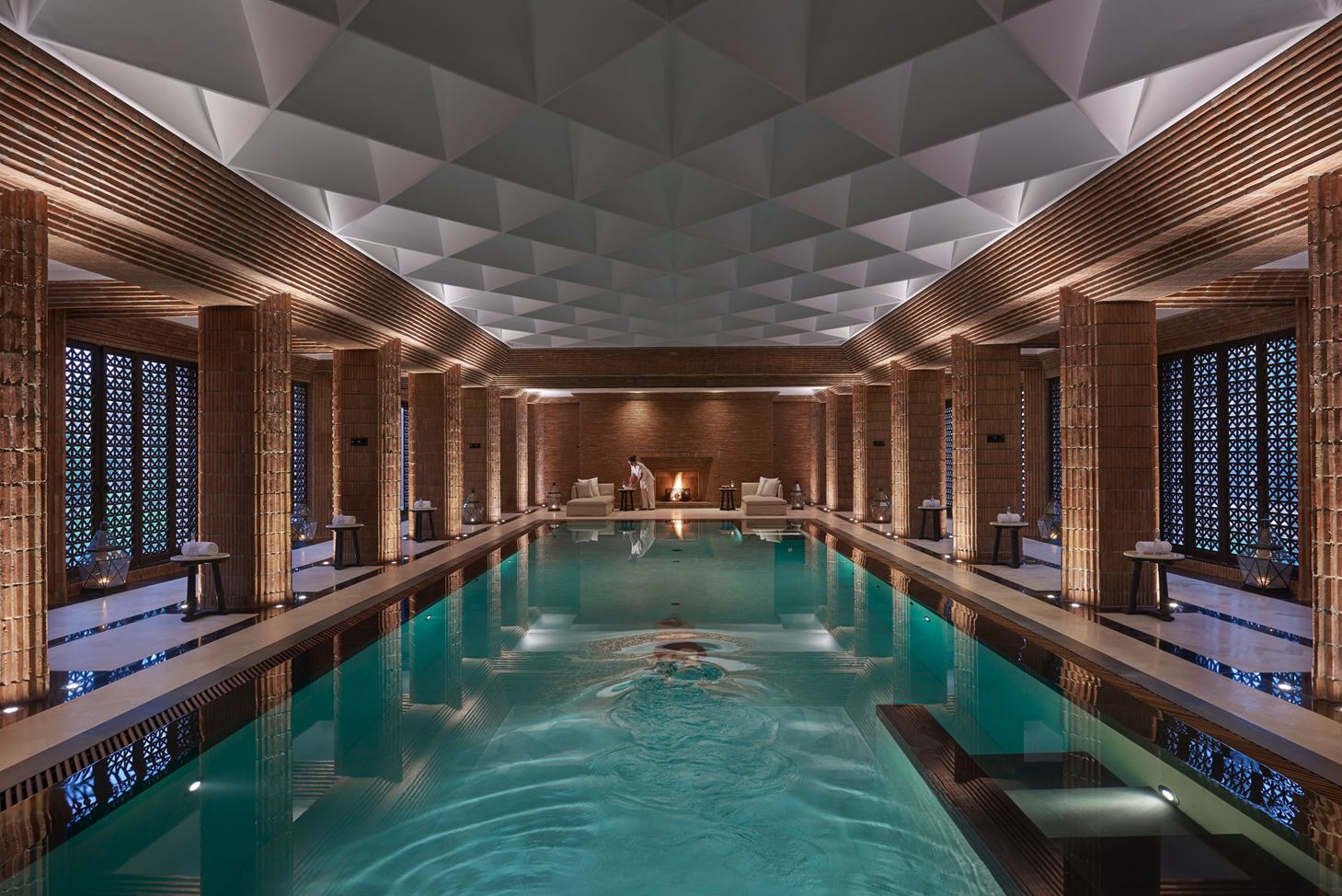 With its Berber and Arab-Andalusian influences, the feel is of relaxed luxury for the cosmopolitan traveller. Interior and exterior spaces co-exist and the focus is on essential materials rather than ostentatious affectations, with a particular emphasis placed on light. Morocco’s cultural diversity has been fused with Eastern and Western touches to give a sensation of travelling around the world as one moves through the main building. The villas, meanwhile, whose architecture recalls that of intimate riads, lend a timeless feel, while the suites, with their scenic views of the Atlas Mountains, immerse guests in the heart of the local landscape. The architecture of the spa, a tribute to the ancient mosques and cathedrals of Andalusia, encourages spiritual contemplation and deployment of the senses. 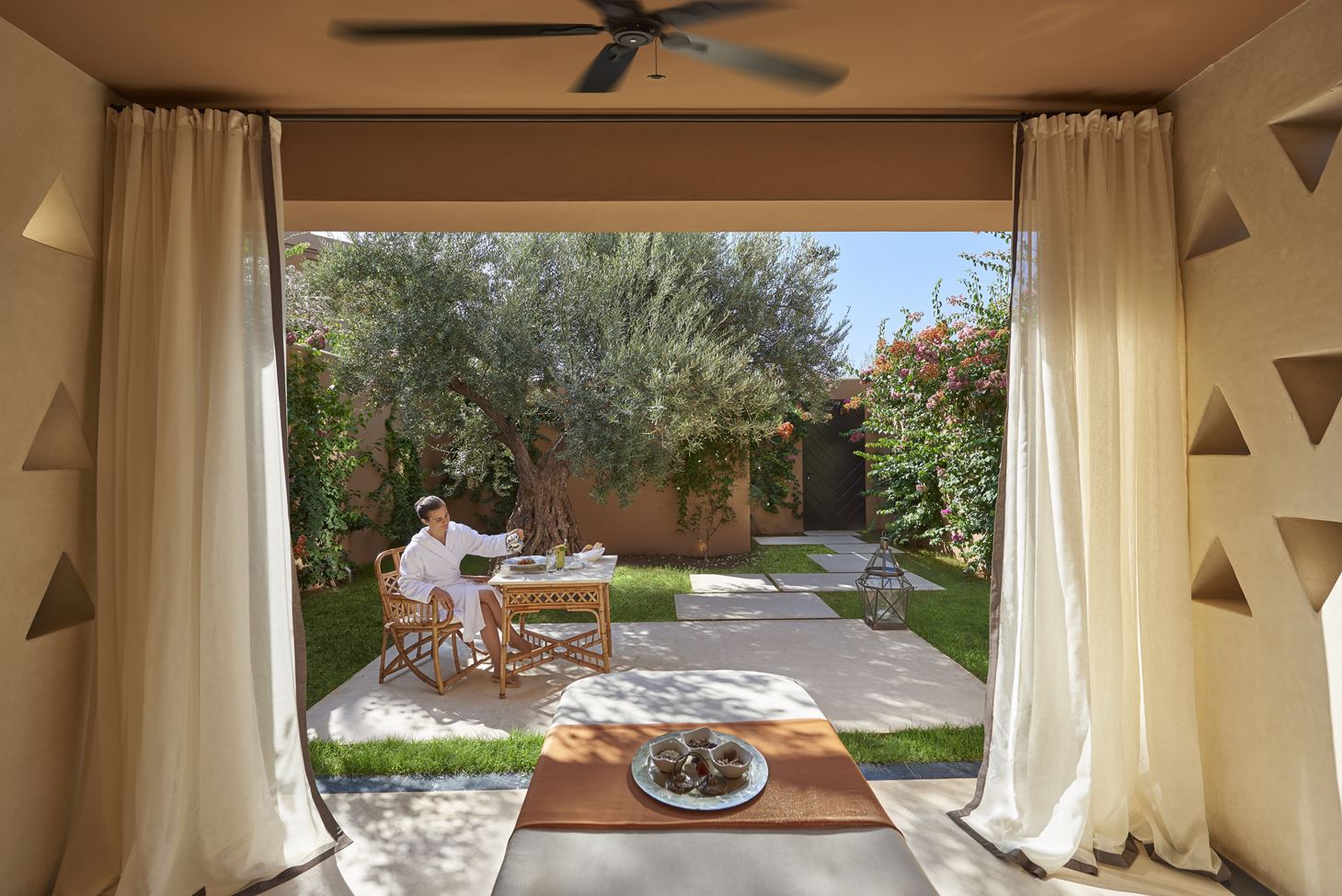 Boissier wanted to allow guests to get lost in the shades of the desert and its rocks by way of the resort’s archetypal motifs, rural materials and white bougainvillea and roses. "The earth and sand were the major influences,” says Boissier. “Along with the colours of the street and traditional Berber women’s clothing. The sand colour of the stonework combined with the large expanses of dominant green from the lush vegetation makes for a true dialogue and fluidity between the exterior architecture and the surrounding nature, while the pools give the illusion of an oasis in this ‘living desert”. 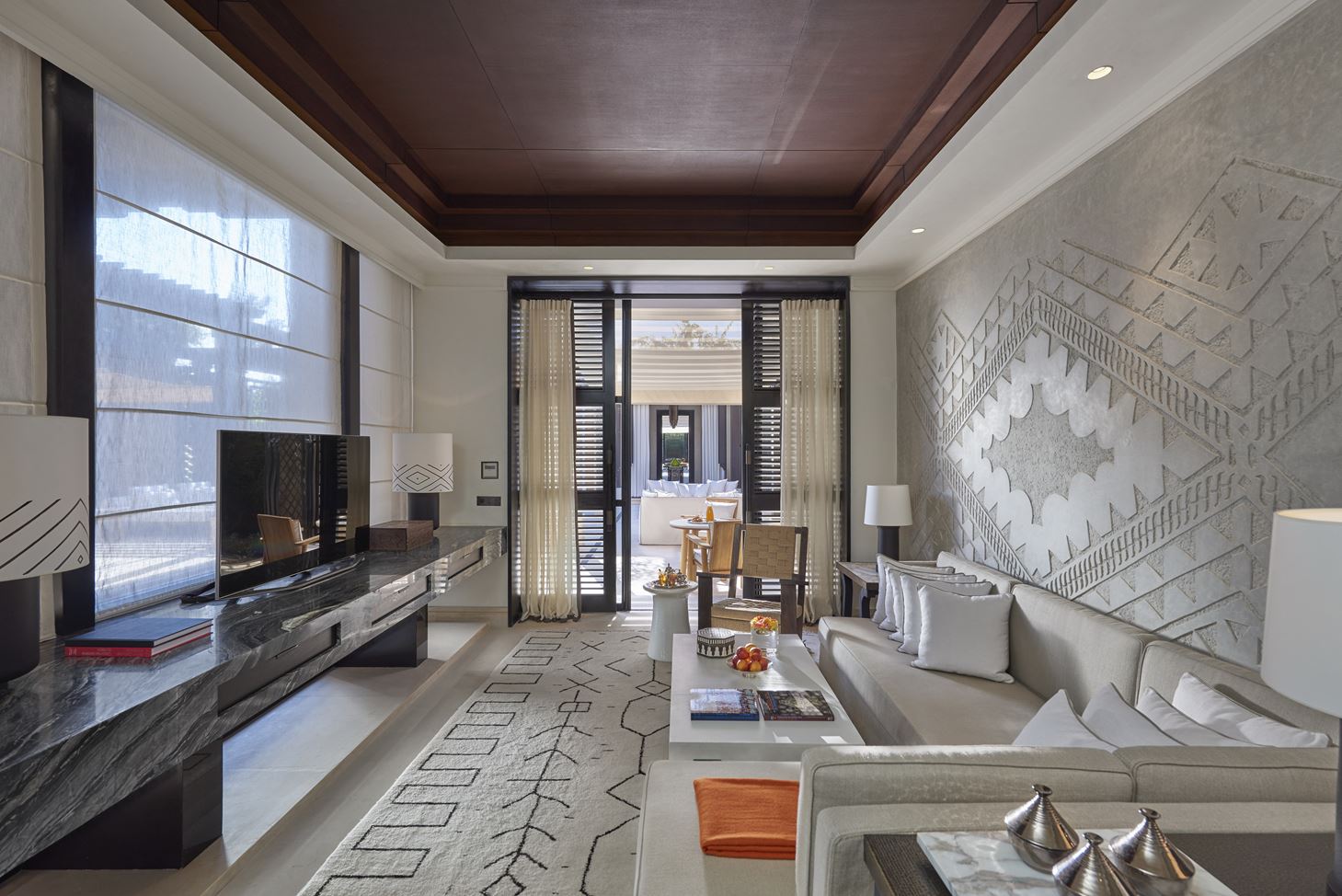 “We are great admirers of Madrasa Ben Youssef Islamic College in Marrakech, and we wanted to lend the entrance a similarly perfect symmetry, with columns and dark wood frames, marble tiles, a tranquil pool painted in gold, carved fireplaces, large bronze bells and the distant view of the mountains. The restaurants, one decorated with lemon-coloured Zelliges tiles, the other with bamboo panels, recall the traditional colours worn by Berber women. The villas, meanwhile, are havens of peace, simplicity, privacy and comfort, with tadelakt plastered walls etched with Berber motifs. As for the spa, it is constructed from the signature, ubiquitous red bricks of Marrakech, making for a mystical architecture where light plays around the bronzed glass blocks of the massage cabins, moucharabieh screens, and fan vaults.”