From the Architects:
Kisito Children's Home is a Residential Childcare for babies 0-24 months. Recent years some children have come presenting disabilities result of encephalopathy, which is why it has been impossible to find a host family until now.

The orphanage is permanently at the limit of its capacity which forces babies and infants with disabilities to share the resting place. As the responsible explained, this practice makes the centre incurs malfunction because children need a specialized and differential treatment. 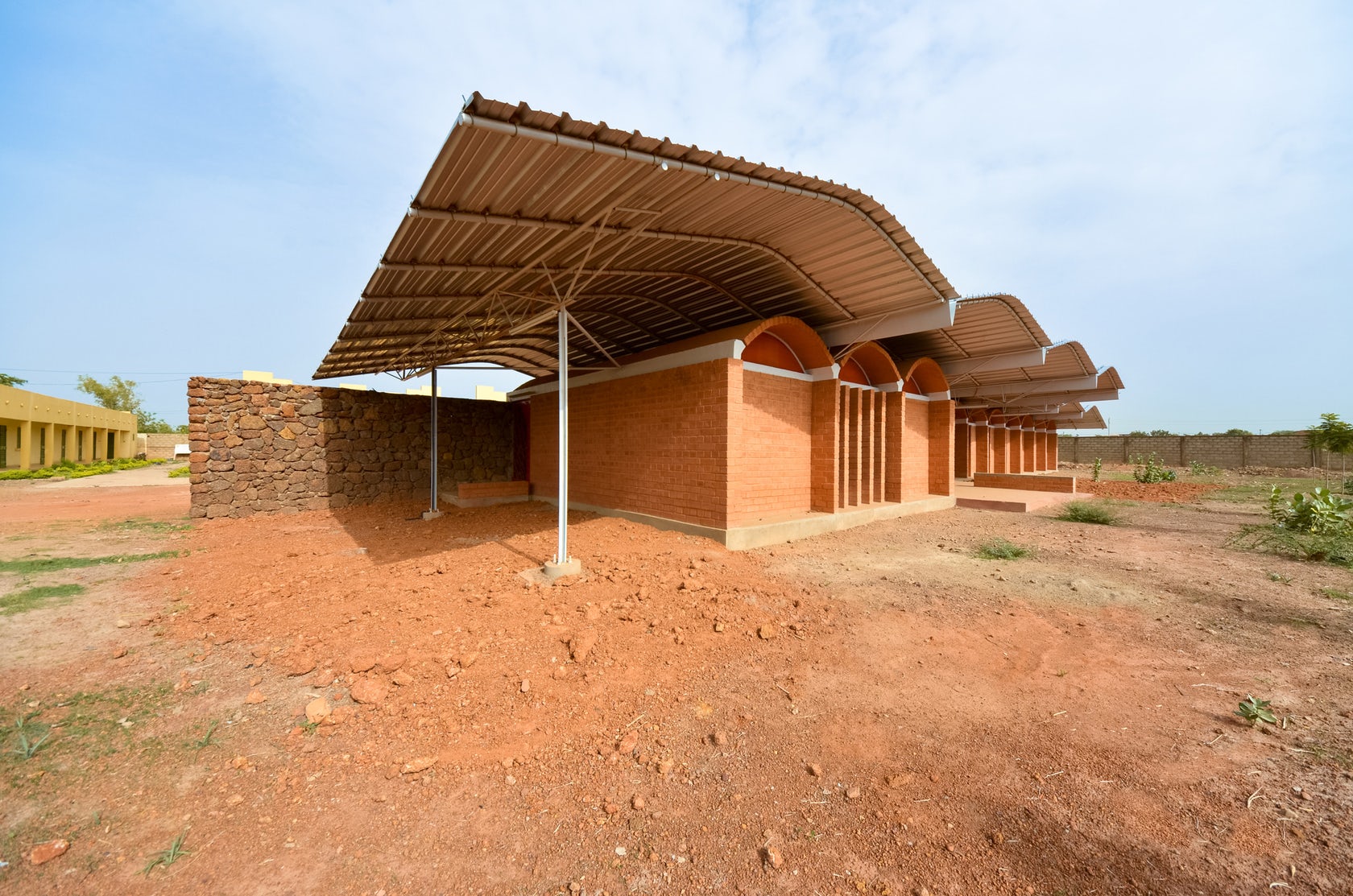 As the responsible explained, this practice makes the centre incurs malfunction because children need a specialized and differential treatment.

In the summer of 2012, four young women held a volunteer at the orphanage. The day with the creatures and their careers and the discussions with the religious head of the centre led them to propose the construction of the house for children with specific needs of HOME KISITO. 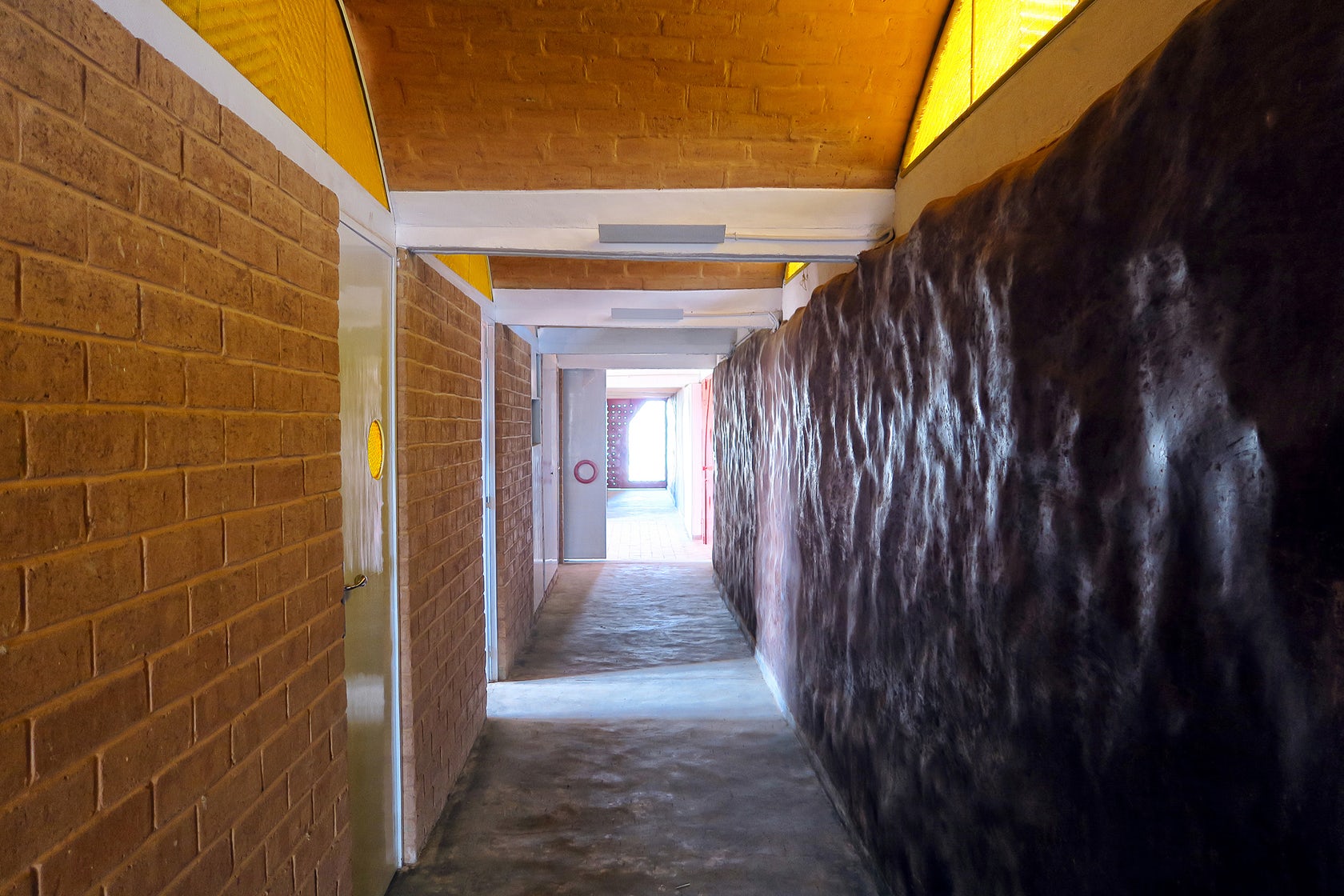 The pre-existing building consists of a central structure and two other volumes located in the eastern third of the plot. The new construction takes a substantially centred position in the empty space remaining, parallel to the facade of the main edifice of the orphanage, and along an axis defined by the powerful visual reference that represents the high water tank. The resulting area between the two buildings becomes the entrance square to the centre, site for receptions and future playground in the shade of the mango trees. 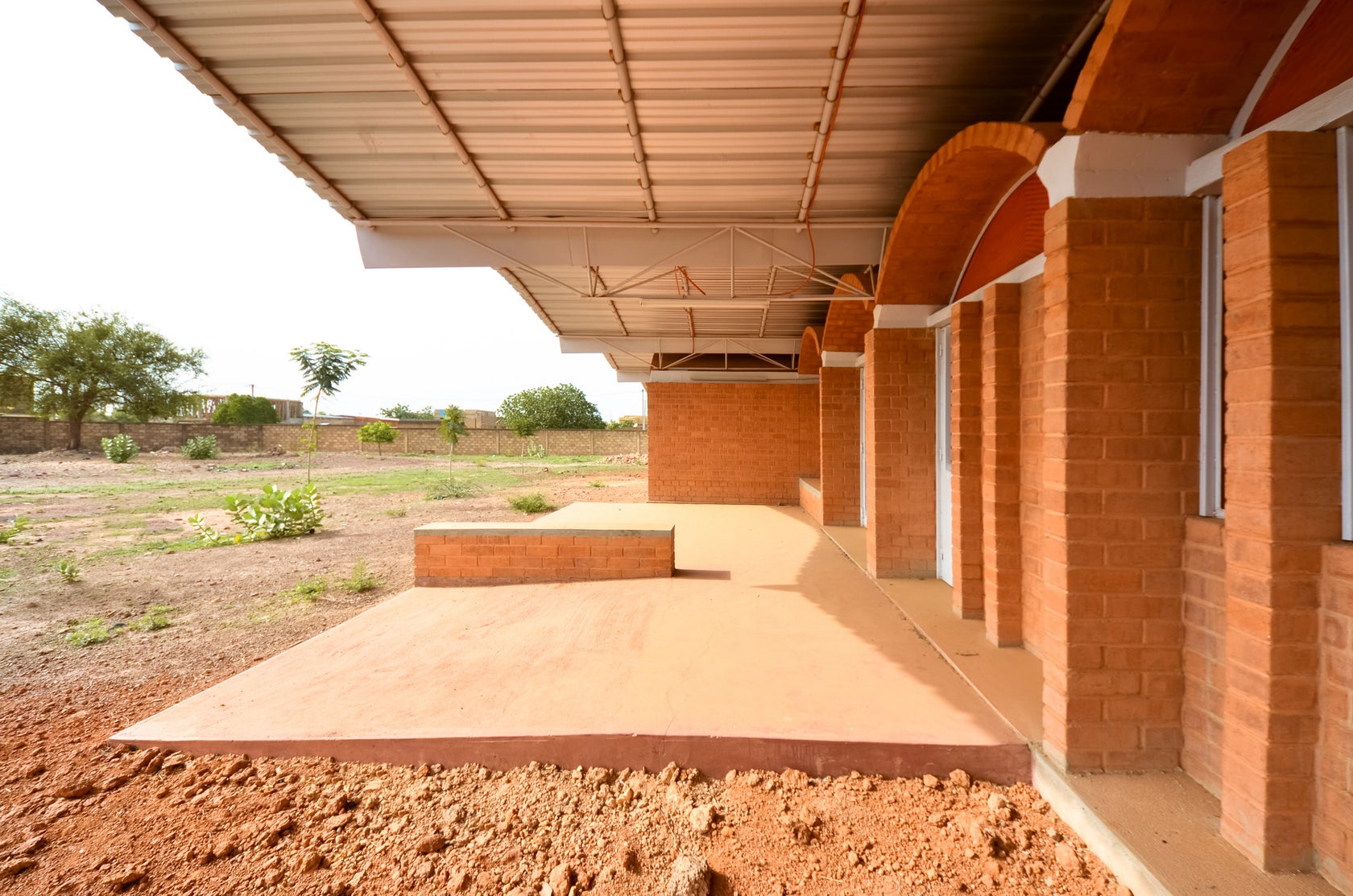 The program was defined based on the demands of the Principal Sister and with the estimating donations aspired to achieve. It consists of a field access, a treatment, a block of services and accommodation wing. 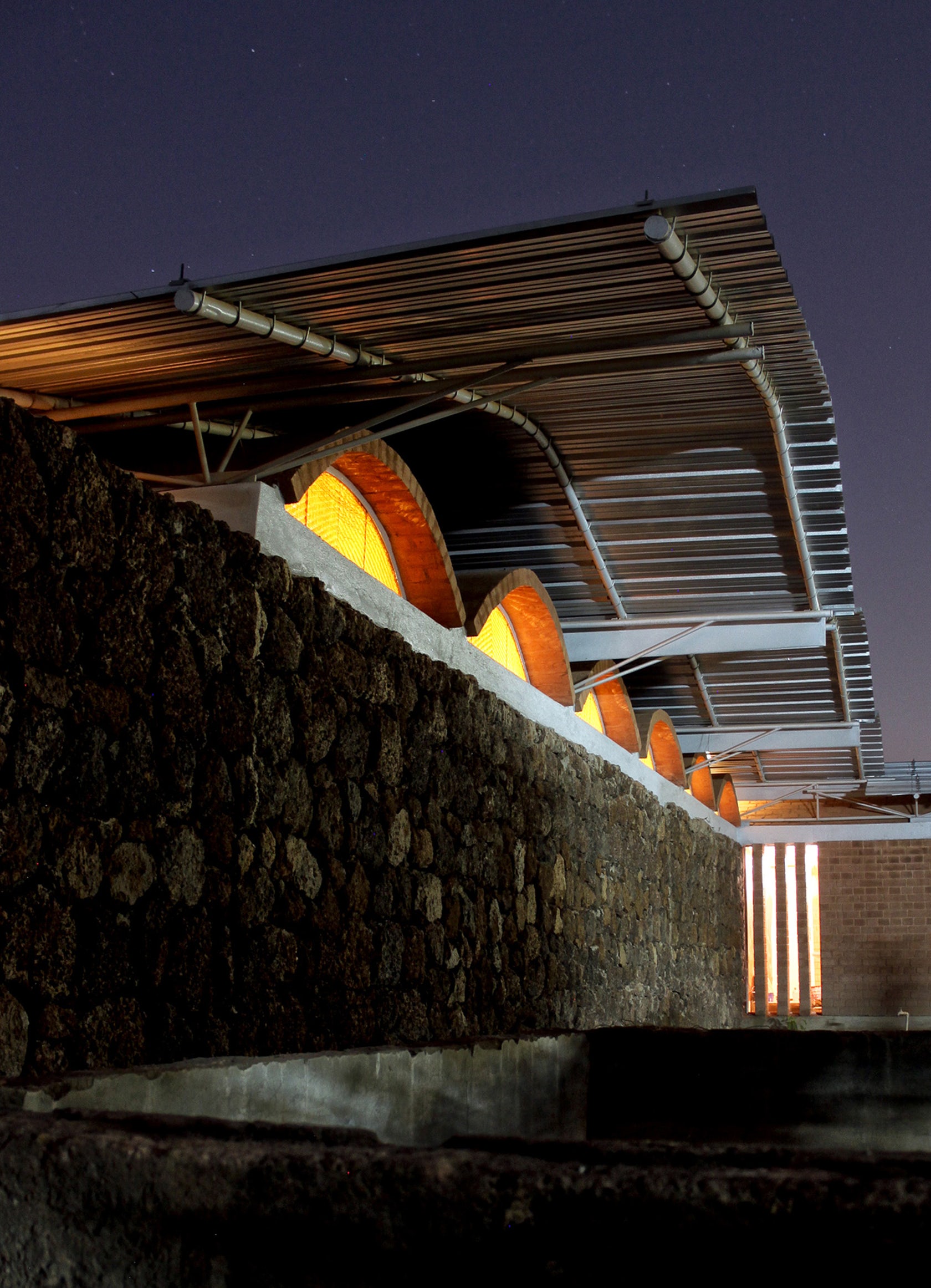 The design and construction of the building attempt to alleviate the constraints of the local climate, such the long periods of high average temperatures with low relative humidity and the rain accompanied by strong easterly winds in summer. To the east of the main façade is a thick stone wall, which acts as a protective screen for the storms and the uppermost of the twin roofs exceeds the height of the building by some 2.5m, creating at the same time a shady perimeter and lowering the nearby outside temperature. Different lines of evergreen trees are planted perpendicular to the direction of the prevailing breezes (east to west), which, in addition to humidifying the air, provide protection from the afternoon sun (flamboyant), reduce the height to a scale more in line with the kiddies (cashew) and provide an abundance of fruit (mango).

The interior of the building is kept cool thanks to the compressed earth walls, vaulted ceilings, and flooring. The coloured “insect screens” on the façades allow the vestibule to be configured as a protected, permanently ventilated internal passageway, permitting cross ventilation and emitting warm rising air. This effect is accentuated with the openings at the opposing ends of this corridor (north-south) and at the level of the terraces (east-west), as well as in the vertical plane, with the interruption of BTC in the central vaults being replaced by an insect screen on the metal frame. 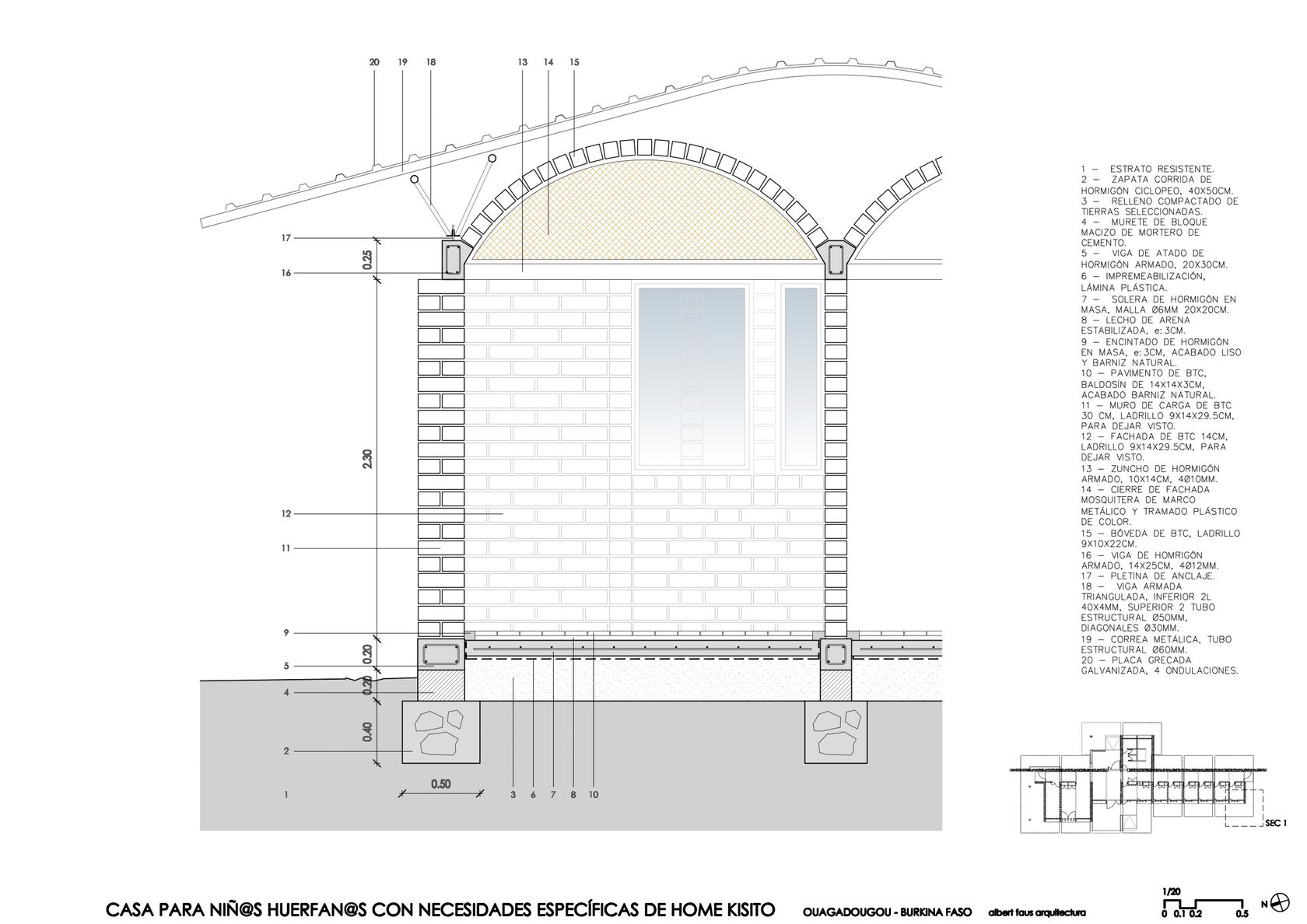 The work has been carried out in a “choral” process, seeking the optimal actor at the lowest possible cost in each phase. The excavation and concrete elements were awarded to a company which agreed to reduce profit margins, taking the social nature of the project into account. The walls were built by young trainees and the ceilings by a highly experienced crew. The stonework and metallic structure were entrusted to teams who had already worked on previous projects, such as the group of women who rendered the interior stone facing by hand with clay plastering. And finally, we adapted the local technique to make chairs and loungers weaving with coloured plastic mesh to get the “mosquito nets” of facades and corridor, working with an association of blind and partially sighted people.