Focused on contrasting the diffusion of Female Genital Mutilation/Excision [FGM], the CBF [Centre pour le Bien-être des Femmes] Women’s Health Centre in Burkina Faso complex investigates the possibility of creating a prototype for cooperation in development in Sub Saharan Countries. The social/health-services program developed by AIDOS, together with its local partners, focuses on providing educational services, information and awareness about women’s sexual and reproductive rights in Ouagadougou’s Sector 27, a peripheral urban area settled by a once rural population. The architectural project is a direct response to a social programme that called for the realisation of a building complex capable of hosting a variety of activities in very harsh circumstances. 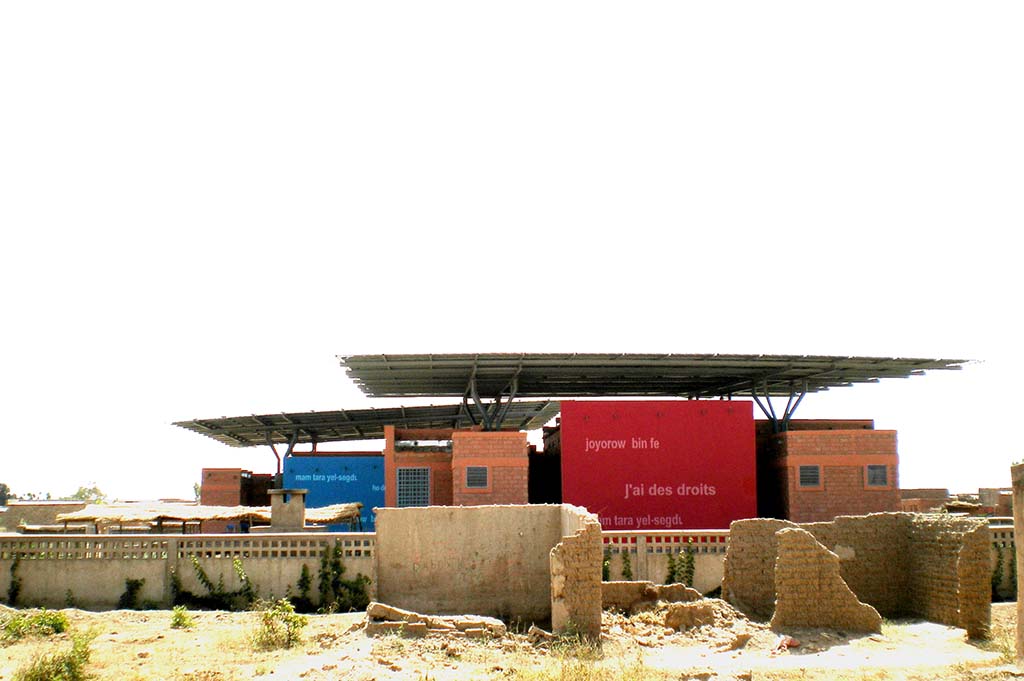 Located in the middle of West Africa in between the Sahara Desert [to the North] and the coastal rain forests [to the South], temperature control is perhaps the most significant climatic issue that has strongly influenced the overall design. The adopted strategy, which is based on the observation of local habits, includes building orientation, upper shading, extensive use of operable windows and gaps between elements, creation of transitional spaces such as verandahs or patios, combination of heavy and light materials and the overall use of vegetation to modify the microclimate.

The CBF facility comprises a court, an assembly bungalow, offices, outpatient’s department, nursery, a great hall, generator rooms, parking and improvised pit toilets organized through a basic orthogonal layout. The design is based on the separation of the primary activities performed by the CBF into two distinct, though closely related buildings: a Training Centre, dedicated to management and awareness-rising activities, and a Consultancy Centre, where medical visits, legal assistance and psychological counseling are provided to the community almost free of charge.

The volumes that contain the different rooms are independent from the umbrella roof structure, placed atop the platform and freely articulated around a series of shaded and ventilated patios that ensure privacy from the exterior. The modular configuration of the structure allows future expansion while preserving the general framework of the building. The building walls are constructed using BTC [briques en terrecomprimée], clay bricks made on site using a rough mixture of earth, sand and water stabilised with cement and compressed with an hydraulic press. The making of these sun-baked bricks consumed no additional energy [transportation and/or cooking], limiting the environmental impact of the entire intervention.

Completed in 18 months by a local builder, working under the direct supervision of FAREstudio, the CBF is a functional and cost-effective answer to the needs expressed by AIDOS, while simultaneously and primarily representing a centre of aggregation and identity for the entire local community. The technological and typological responses offered by the project, on par with its social objectives, represent an innovative approach to traditional local building practices, presented as the natural formal expression of the changes and new approaches promoted by AIDOS. The project privileges an integrated approach to interaction between built space and climatic-environmental issues, based on considerations of sustainability and appropriateness.