It is important to recognize the character of the Architecture of the North. This is where the New Algerian Parliament  by Bureau Architecture Méditerannée comes into play, a building deeply enshrouded in arabic tenets and heavy symbolism. It seeks embody the idea of democracy in action, the Algeria of the future, freedom, peace, strong but deliberative power. The design communicates a distinct national identity founded on universal values that border on openness, freedom of space and an extroverted appeal to the public street. 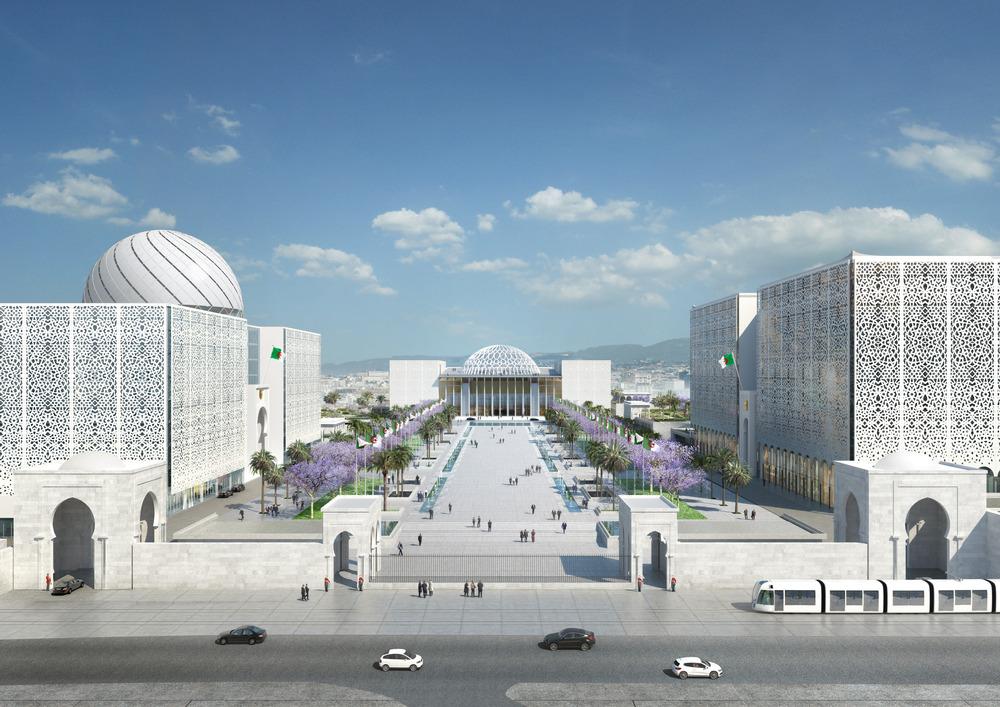 From the Project Architects:
The project includes the People’s National Assembly, the National Council (Senate), the Chamber (Congress), and a residence for legislators.  Algeria’s new parliament is a project that must meet the highest standards.  The building needs to embody the idea of democracy in action, the Algeria of the future, freedom, peace, strong but deliberative power. The architecture must communicate a distinct national identity founded on universal values. How can a 220,000 m2 complex convey openness, dialogue, debate – an essentially dialectical spirit – without defaulting to an architecture whose monumental scale creates a totalizing effect? 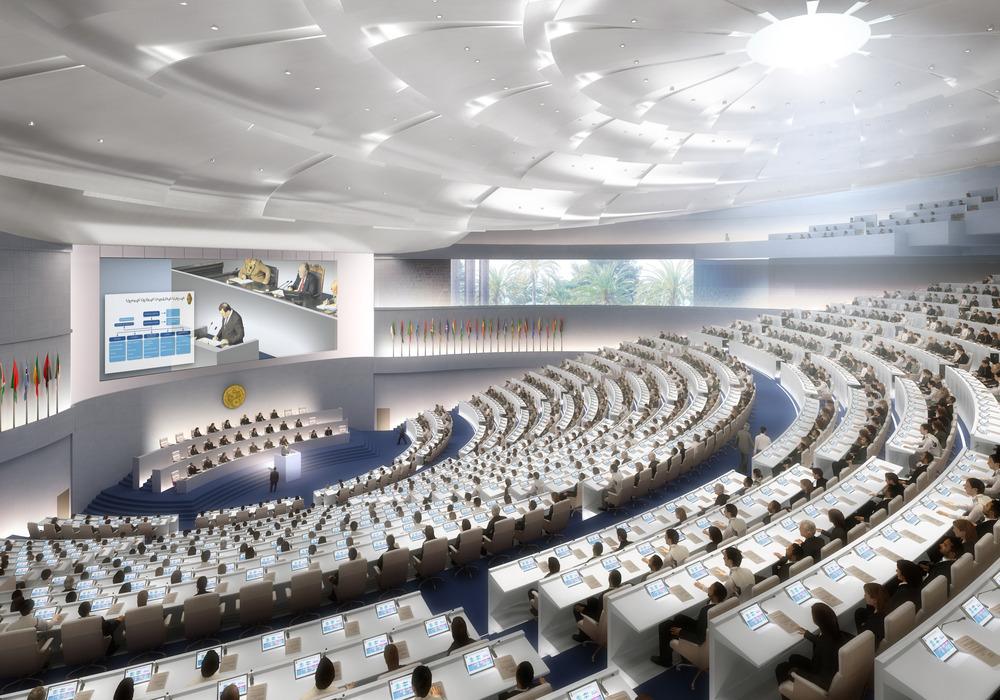 It is necessary to look to democracy’s architectural roots, which originate in the Mediterranean basin and span several millennia. Those foundations start with a large public space, the plaza, a symbolic gathering place for the free people who give the republic its legitimacy and authority.  The new heart of Algeria’s parliamentary democracy is therefore to be located on a majestic square, with the largest dimensions possible for the site. The buildings will be significant not only in size, but first and foremost through the open public space that they define and designate.  Oriented on an east-west axis, with the historic city as a backdrop, the square unites East and West, the modernity of the new city and the tradition of the old.  A key element of the new political centre’s organization is the way in which it embodies significant ideas: the development of a democracy that successfully combines tradition and modernity, capable of serving the nation’s interests while remaining open to the world.  These notions underpin the architecture of the entire new political centre and the arrangement of the seats in the two legislative houses, the Senate and the Congress. 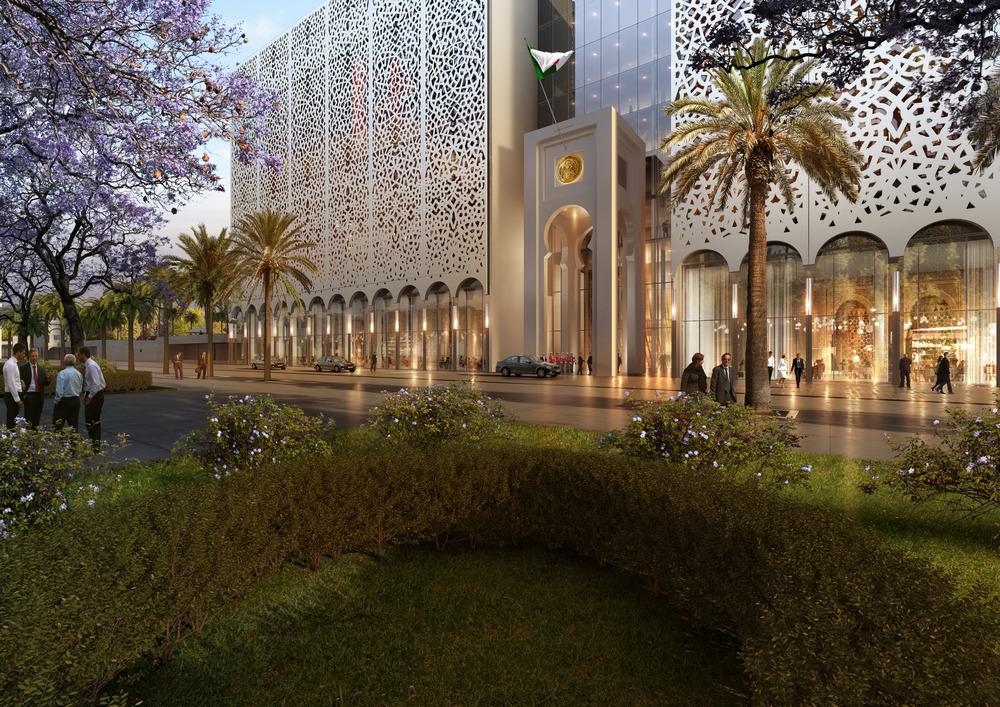 The location of the Parliamentary Assembly and the National Council on either side of the square creates a monumental gate serving as the entrance to the immense plaza. This arrangement, with the upper and lower houses facing each other on a north-south axis, completes the square’s organization around the cardinal points, along with its symbolism as a gathering place. A conference hall shared by both houses, which will also be used for international meetings, forms the plaza’s eastern border. Located along the square’s main axis, the hall is at the center of the new political complex’s layout.

The conference hall was given its prime position not only because joint sessions of the two legislative branches are crucial moments in democratic life, but also because the facility will host international delegations, and Algeria’s hospitality customs require that guests be given an honored place. 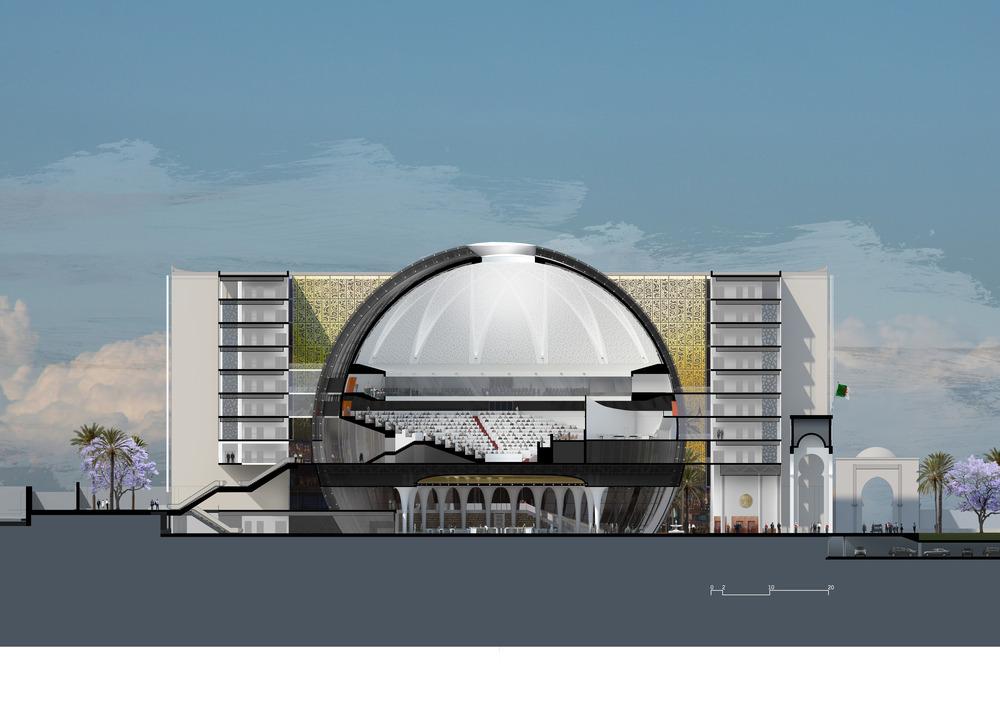 Organized as they are, the centre’s major elements come together to create a space steeped in the symbolism of strong democratic values: freedom, assembly, a sense of history, tolerance and hospitality.  The buildings, being so closely related, are variations on common themes. The Senate and Congress buildings both have an assembly hall at the centre, surrounded by all the rooms needed for orderly operations, such as offices, meeting rooms, lobbies, etc.  This arrangement gives the outer rooms views of lush gardens and the Algiers skyline and harbour, while the assembly chambers add their domes to the skyline. The domes, the intricate mouchrabiehs, the simplicity of the large volumes facing the vast square, and the luxuriant gardens are all in keeping with the long tradition of Arabic architecture, while the construction methods, glass façades, and climate and lighting control systems are all based on the most modern technology.
Viewed as a whole, the architecture thus situates itself clearly in historical, cultural and geographical context, while using technology in service to the sense of appropriateness and identity. All of these elements come together in a tribute to the triumph of democracy: the buildings make a statement about the precious nature of this political system. The transition from exterior to interior is marked by a series of materials of progressively greater refinement and rarity.

The glass building façades are shielded by ceramic and concrete mouchrabiehs that diffuse sunlight and obscure views. The façades of the inner courtyards and assembly buildings are protected by gold leaf embedded in glass plates, and by leaves made of alabaster. This sense of preciousness is also expressed through the use of water: in colourful mosaic-lined pools, gently babbling streams, and lively fountains that produce a cooling mist, as well as through the scent of orange and lemon trees, luxuriant vegetation and shade provided by fig trees.

By surrounding the complex with gardens – beyond the shadow of the assembly buildings overlooking the square – the site becomes a park echoing the famous parks of El Anasser or Diar el Mahcoul.

The construction of the new Algerian parliament and its grounds thus reveals all its facets: it is at once a tool of democracy and a tribute to it, an enlightening expression of the democratic order, a precious and yet familiar space, where all citizens will recognize the best of their culture and its values.